Whatever happened to Satan? 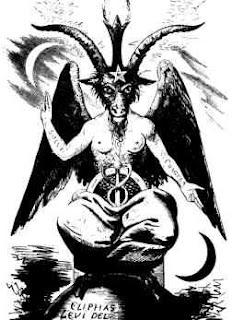 Have You Seen Me?

I was checking out the official website for the movie Insidious, which came out last Friday, and I was thinking about maybe going to check it out tomorrow night.  The movie looks good, and it's made by the guys who did Paranormal Activity

, which I really enjoyed both the installments of so far and am anxiously awaiting Paranormal Activity 3, so I have a feeling I will at least like it a little bit.  So I was watching the trailer for Insidious and, yeah, it looks like it could be a good movie.  I'm aware that most supernatural horror movies made in the last decade or more are pretty much only any good as a trailer, where all the quick cutaway scenes to creepy kids, shadowy faces and shit jumping out at you actually has a modicum of scare factor, and that the actual movies themselves suck dick almost without exception.  The Ring, The Grudge, The Sludge, The Judge, The Ring 2, One Missed Call, etc... If Hollywood isn't making a bad remake of a mediocre foreign horror film that completely loses whatever creepy factor it might have ever had in the translation, then it's putting out CGI-laden snoozefests where you get so desensitized to pointless scenes of weird faces in mirrors and shit jumping out at you for no reason that you don't even give a shit anymore.  I'm a little concerned that Insidious could fall into that same rut of predictability and forced scares, but I'm optimistic for now because, as I said, I am a fan of the Paranormal Activity series and the other guys working on this movie are the dudes who did Saw

, and while I'm not much of a fan of the Saw series as a whole, the first one was fairly inventive and definitely they don't shy away from violent or disturbing images in those movies, so as long as the PA guys handle the plot and the Saw guys take care of the shit that makes me squirm around in my seat, I think they'll be ok.  However, as I'm watching the trailer and thinking about all the horror movies I've seen in the last 10 or 15 years and how, with very few notable exceptions, they are mostly devoid of the presence of the horned goat lord or any of his spooky arch-demons.  I saw The Last Exorcism

, and I enjoyed it, and I thought it was a good attempt to get back to the golden era of Satanic horror made in the 70's and 80's, but a movie like that is rare.  Instead I've seen terrible and unnecessary remakes like The Omen

and Night of the Demons

rather than new, creative takes on the oldest, and in my opinion scariest subject for supernatural horror.  It's not that I don't like a good ghost story, it's just that good ghost stories are few and far between.  When movies like The Haunting in Connecticut

are considered scary, you know the genre is being strip-mined to depletion.  In contrast, even cheesy movies about Satan and demonic possession can be great if they're done with any sense of coolness and superstitious homage whatsoever.

ranks among my top 5 scary movies of all time.  The first time I saw it as a kid I nearly shit my pants.  I remember I watched it at my friend's house who lived across the street from me, and on the 50-yard or so walk home, I literally sprinted and leaped from the porch light, to the street light on his side of the street, to the street light on my side, to my lit front porch and then quickly inside.  I had nightmares for weeks.  That shit scared the hell out of me, literally.  It made me want to go to church just so I would have less chance of ever being possessed.  Don't worry horror movie nerds, I am aware that Regan MacNeil was possessed by Pazuzu and not the devil himself, hence my inclusion of the "spooky arch-demons" qualifier in my thesis statement.  I'll take a crazy ass wind-demon over some stupid killer cellphone any day.  The point is, The Exorcist was scary as all hell because it dealt with Satanic horror in a genuinely creepy, disturbing and downright frightening way.  The atmosphere of the film was perfect, the pacing was just slow-building enough to get you to just start to say "When is this thing going to start getting scary?" and then BOOM!  LET JESUS FUCK YOU!  And that's another thing, The Exorcist was blasphemous as a motherfucker.  A girl raping herself bloody with a cross, her demon possessed body spewing profanities at the priests, pea-soup vomit... William Peter Blatty didn't pull any punches in his screenplay, and director William Friedkin did an excellent job of adapting Blatty's vision to film.  But see, that's what makes great Satanic horror - the shocking blasphemy, the exploitation of the fear that most people have of the devil and all the things we were taught to fear in church and Sunday school.  Unlike most iconic horror monsters like vampires, werewolves and even my beloved zombies, the devil is something that just about everyone who's ever gone to church in their lives has been told is real.  Regardless of your particular beliefs, all religions have some version of Satan, the fallen angel, the dark antagonist to God's benevolence.  In the U.S., about 70% of the population identifies themselves as being Christian, that means 7 out of 10 people believe the devil is real and are freaked out on at least some level by the idea of Satan wreaking havoc on mankind.  This is why I don't understand why we don't see him out there like we used to!

I remember the wave of Satanic horror that came out in the 70's and 80's.  Besides just The Exorcist, there were classics like Rosemary's Baby

and A Race With the Devil

.  Perhaps it was a result of the cultural interest in spirituality that followed the end of the peace and love 60's, maybe it was a commentary on shocking, violent and perplexing tragedies of the era, from the Manson Family murders to Jonestown.  Whatever the reason, the decade or so from the early 70's to the late-80's was the pinnacle of our national fascination/obsession with the supernatural, the occult and all things unexplained and otherworldly.  It was the era in which Anton LaVey wrote The Satanic Bible and founded the Church of Satan.  It was the time that saw the highest number of sales for Ouija Boards

.  People like Uri Geller wowed television audiences and inspired dozens of hackey imitators with his seemingly "psychic" abilities, and men like James Randi stepped up to challenge their claims.  Mood rings and good luck charms were trendy as hell.  The people were swept up in spiritual/supernatural fever, and it was reflected brilliantly in the classic horror films of that era. 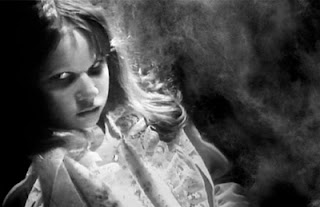 I make that Ring girl look like an asshole...
It's not just movies, either.  Beelzebub is sorely lacking from music these days as well.  Sure, guys like Deicide

and a few crazy ass Norwegian black metal bands are keeping him alive, but other than getting crazy pentagram tattoos to look "shocking," or incorporating them generically into their album art of stage props, true Satanic influence in music has taken a sharp decline of late as well.  It's not as if Satanism was a particularly driving force in music, even the heaviest of metal.  In fact, it really was little more than an image element, incorporated to make bands look scarier, more controversial or shocking to parents and authority figures.  Many of the bands that paid the most artistic homage to Satan were actually just normal guys who believed in God and didn't practice any of the beliefs their on-stage image and persona might allude to.  At one time though, just throwing a pentagram on your album cover was enough to get swarms of Christian soldiers out in front of your shows with picket signs, it spurned censorship and efforts to have your records banned from stores and communities.  It helped alarmist, right-wing Christian huckster scumbags like Bob Larson build their careers by playing off of the fears and ignorance of Christian parents all over America.  Nowadays, I think even Justin Beiber

has a pentagram in his stage show. What's up now, Slipknot?
There's just no fear of the devil anymore.  Maybe it's the increasingly cynical popular view of religion and spirituality in general, maybe it's a gradual desensitization to Satanic themes and imagery that may be a result of a generation that grew up on those shocking films and listened to that controversial music of the 70's and 80's and just aren't fazed by it the way their parents were.  Personally, I think those are all valid possibilities, but I think a lot of it also has to do with the fact that movie makers, writers, story tellers and musicians just aren't putting any effort into really trying to scare people with the idea of Satan, demons and hell on earth like they used to.  Too many filmmakers and studios are being lazy and remaking movies rather than finding a new, creative take on the theme.  It's all the influence of corporate bullshit that has ruined the genre.  Companies don't take risks anymore.  They want a movie that they can accurately predict the box office draw of before it's even released.  They want to walk in the well-worn path of previously successful plot lines and subject matter.  Big movie companies don't want to back a film that might be too shocking or controversial anymore because that could result in mediocre box office.  They want just shocking enough to manufacture publicity, but not so shocking that religious groups start protesting at screenings.  Well, fuck that, I want my scary-ass Satan shit back!  I want movies so fucking scary and disturbing and shocking that church leaders protest to congress to try and get legislation passed to stop them from being made!  I want movies that are so creepy, evil, dark and fucked up that I have to sit and take a long, hard look at myself and really evaluate where the fuck my head is at that I let myself sit through that and actually enjoyed it.  I want that Exorcist reaction I had as a kid again, where I get so scared shitless by a movie about the devil that I want to start going to church again, just in case.  I want to sit there, speechless, as the credits roll, just trying to absorb what the fuck that was that I just saw.  Don't give me the fucking devil

in an elevator, don't give me a 3rd generation knockoff of The Sixth Sense

, don't give me rehashed, retread, reheated bullshit, filtered and dumbed-down and made into a palpable nugget for teenagers to blow their disposable income on.  Give me something that changes the national dialogue, give me something that evokes strong, polarizing reactions from the general public.  GIVE ME HELL ON EARTH! 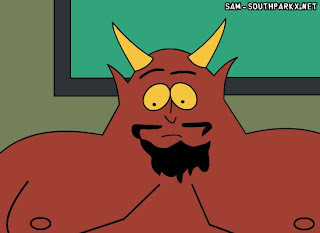