Lazy, upbeat Monday post. Or: A tribute to Mr. Show with Bob & David

So, because I like to start my Mondays off with upbeat, light-hearted stuff and go for some laughs and shit instead of just diving into heavy, depressing ass political or religious diatribes or whatever, and also because I was completely inspired by a post my good friend Stryder Callison made on Facebook today that reminded me of this show, I'm dedicating today's blog post entirely to Mr. Show with Bob & David. 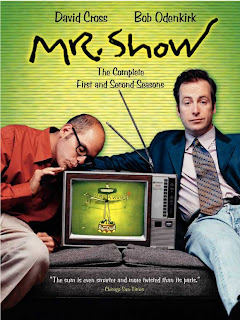 Mr. Show with Bob and David

was an HBO series, starring Bod Odenkirk and David Cross that ran from 1995 to 1998.  It was essentially a sketch show, but it had a unique trademark of transitioning from one sketch to another with a random segue.  Like, a woman might walk out of the scene at the end of one sketch and into the scene that started another, or something like that, though usually more humorous that that example.  But it gave the show sort of a continuous, fluid flow that made it just that much more different from other sketch comedy shows at the time, like Saturday Night Live, Kids in the Hall, etc.

In addition to Odenkirk and Cross, Mr. Show was a showcase that helped launch the careers of a shit load of other great comedians, such as Sarah Silverman

, just to name a few.  The show wasn't a huge commercial success, and only lasted 3 seasons, but it was critically acclaimed and, in my opinion, way ahead of it's time in terms of the subject matter and style of comedy.  I think people just weren't ready yet for such ballsy, blunt and deliberately controversial comedy.  Shit was brilliant to me, I loved this show and currently own all 3 seasons.  And now, with some help from Youtube, I want to share some of my favorite clips and give you guys a taste of why I think this is one of the best and most underrated sketch comedy shows ever and why you should all get on board the Mr. Show train.  Without further ado...


Indomitable Spirit!  One of the funniest sketches from the entire show, in my opinion.  The first time I ever saw this show was the episode with this sketch, and I laughed my ass off and knew I was seeing something fucking genius.

"Swear to God" with Reverend Winton Dupree.  I think this sketch was in the same episode as Indomitable Spirit.  Maybe not, I dunno, but it's funny as balls.
The Hail Satan Network.  Another great jab at religion.  It's the PTL of Satanism, fucking great.


Here's one with Brian Posehn in it.  Also, it's funny as hell.

This sketch is the shit not only because it features Jack Black, but also because it's a musical version of the salesman and the farmhouse joke.


Ronnie Dobbs, "Can't a man control his bitch with violence?"