Today's post is a letter my grandfather wrote to Navy SEAL magazine in 1985.  My grandfather didn't talk much about his service during the war or what he did as a member of the SEALs, or the UDT as they were called then.  What I did know was that he lied about his age and enlisted at 17 so that he could fight Mussolini and the Axis.  He was the son of an Italian immigrant and was told that the greatest thing a man could do to show his appreciation for the opportunities being an American grants you is to serve in the military and defend those freedoms and opportunities with your life.  I know that he fought in WW2 and continued to be a part of the UDT until 1950.  I know that he earned a purple heart for being wounded in combat, but he never told me the story of how it happened.  He didn't like to talk about his service, he was never a boastful person.  He showed me pictures of his unit, the guys he served with, the boat he was on, but he didn't like to talk about the things he did.  I know that a lot of his service as a member of the UDT was covert ops stuff, things that he wasn't allowed to discuss with anyone, but I also think a lot of it was things you don't want to tell a young kid about.  War is hell, and my grandfather served in one of the toughest, most elite and highly-trained branches of the military during it.

However, one day when I was 10 years old, he showed me this letter that he had written to Navy SEAL magazine, and they had printed in the following issue.  He was upset that they had done a piece about the UDT - the earliest incarnation of the modern SEALs - and failed to mention the formative years during which he served and helped to develop the elite unit.  In many ways he and his fellow servicemen were guinea pigs (no pun intended, fuggetaboudit!) who helped to test and pioneer devices and tactics that would become the standard for the UDT as it evolved into the SEALs.  He wanted his story and the accomplishments of he and his fellow UDT pioneers to be recognized, so he sent them a letter, and they published it.  He was proud of this, and showed me the letter.  This was probably the most he ever told me about what he did as an active duty serviceman, and he never said a single word.  I defer the remainder of my blog post to one of the bravest guys I've ever had the privilege of knowing, my grandfather:

We got no extra pay of any kind.  We had a one-man, battery-powered submarine that we were experimenting with.  I believe it was an Italian invention.  This was a top secret project.

In 1948-1949, we started experiments with the Aqualung in the Chesapeake Bay.  As far as sophisticated material, we had plastic explosives, such as C2C3 tetratol, TNT, shape charges and bangalore torpedoes.  We fired our explosives electronically with hell boxes, and with friction-type fuse lighters with blasting caps.

We practiced what we called "sneak and peek" operations.  You would probably call them covert operations now.  We had Judo experts teach us their skill

We experimented at swimming missions with small arms weapons, such as what we called 'grease guns.'  They were small machine guns with 15 rounds in a clip.  And, we experimented with launching swimmers from helicopters, jumping from about 20-30 feet.  We were all qualified water safety instructors, and we stood lifeguard duties at the amphibious base.

We had to clear channels, make channels and blow up obstacles to clear the way for ships and boats.  We were even called on to try to help free the "Mighty Mo" when she was stuck in the mud in Chesapeake Bay, just out from our training beach in Little Creek.

We went on Operation Shark Chaser at Key West, Fla., to test the shark chasers the Navy used in life preservers.  This was done by putting swimmers in the water where most of the sharks were known to be.  A little risky, wouldn't you say?

Our wetsuits were one-piece rubber that you had to climb into from the back, then your buddy would fold the flap (like a flag, sort of) and clamp it shut with a big brass "C" clamp.  We wore Navy long johns underneath.

Team 4 went to the pole in 1946 or '47 and cut holes in the ice to get into the water.  Their purpose was to see how long the human body could stay in water that cold.

My team and I participated in the mock invasion of Argentia, Newfoundland.  Sixteen of us were aboard the submarine groups; seven of us were to go in and take the station, the other nine were to swim in on the ships there and blow them up.  I might add that our mission was a success.  We not only destroyed the station, but our swimmers sank every ship that was in the harbor (approximately 12 if I remember right).  We also made mock invasions of Miami Beach, Fla., and Atlantic City, NJ, and our team, along with Team 4, helped to film the movie "The Frogman" with Richard Widmark.

I could go on about the things we did and how we were the first in some of the things that are now taken for granted.  I just thought I should give our teams back then some of the credit and attention they well earned and deserve as part of the history of the UDT's.

I think it fitting that, with all the talk about SEAL Team 6 and their outstanding work in finding and killing Osama Bin Laden, that I can share this letter that my grandfather wrote 26 years ago as just a proud, retired Navy guy who wanted to see his guys get the credit they deserved for helping pave the way for those elite soldiers to perform the kinds of extraordinary feats usually reserved for action movies.

My grandfather was about as stereotypical Navy guy as you can get.  He had an anchor tattoo on his arm, and a battleship across his chest.  I remember when he had his first open heart surgery and they had to cut him open and when the scar healed, his battleship had become a U-boat, and of course we gave him a ton of teasing about it.  That's when he told me "This is why you don't ever get tattoos, son."  As you can see, I completely listened to that advice...

He was proud of his service and his accomplishments, but he was humble.  He didn't brag, he didn't regale us with war stories, he just sort of sat there and knew that he was the shit and that he was part of some amazing stuff and really I suppose that's enough right there.  Instead, he was just my grandpa, the nicest, funniest, most generous and caring guy I ever knew.  He's responsible for raising my dad to be my hero and the greatest influence ever in my life.  He's responsible for raising my cool-ass uncle who still loves metal and I swear to God can get you exited about CSPAN if you give him 30 seconds to talk about it.  He, along with his best friend and neighbor Willie Pereira, were responsible for teaching me some of the most vulgar and inappropriate Italian and Portuguese jokes ever created (They were Italian and Portuguese and would literally spend all day telling me racist jokes about each other as their way of giving each other shit, using me as the 3rd party conduit).  And, as I can see from reading and transcribing his letter, I think I got a little bit of my compositional talents from him as well.  One thing that guy could do was tell a story.  He could sit me on his lap and keep me entertained for hours just talking about everything and nothing at the same time.  He would take me to the coast and we would sit on a rock out in the surf with our fishing poles and I think I caught one fish in 10 years, but it didn't matter, the real treat was being out there with my grandpa, spending time with a guy who was so much more of a hero and a badass than I ever knew.

Today I am proud to share my grandfather's words, as much as he was proud to have written them.  Greatest generation indeed.  Thanks for reading this. 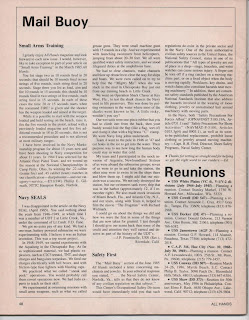