Happy Birthday, Corvette! (This one's for you, Mr. O'Brien!) 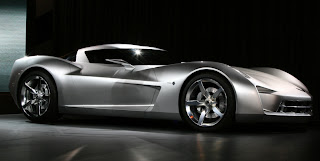 Today, the Corvette turns 58, as was brought to my attention by my good friend and fellow muscle car enthusiast Shawn O'Brien.  I've always dug the Corvette, even the really crappy ones that came out in the 80's, and so today I'm all about celebrating one of the baddest-ass American sports car lines ever produced, and pound-for-pound, not only one of the best performing sports cars on the market, but one of the most affordably-priced as well.

So here, in semi-chronological order, is my list of my favorite Corvette's ever produced by GM.  I'm sure Shawn will remind me of some bad bitches that I forgot to include, but I'm gonna do my best to get the goodest of the good. The one that started it all.  The very first 'vette to roll off the line and show the world that Chevy was about to bring something special to the table.  There's a world of difference between these first 'vettes and their eventual evolution from an open-air roadster to high-performance coupe, and in many ways this first 'vette looks more like the classic Ford Thunderbird than the road-ripping muscle car we know it as today.  However, Harley Earl's groundbreaking design would be just the start of a 6-generation pillar of the Chevrolet automotive line, and with only 300 hand-made polo white '53's ever made, it's the rarest and most sought-after Corvette ever produced.  Incidentally, the 1953-1955 'vettes were the only models that offered just an inline 6-cylinder with no V8 option, so these guys really were only a glimmer of what they would eventually become. 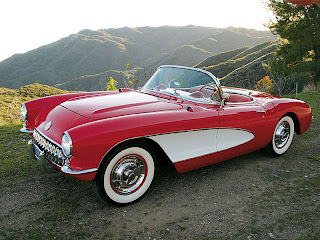 Still modeled heavily on Harley Earl's original design, with some updated modifications, including dropping the rear fins for a sleeker tail end, the '57 'vette had the distinction of sporting one of the first mass-produced engines that generated 1hp per cubic inch, in the 283hp, 283ci, 4.6L small block V8, a fact that Chevy used in their advertising for this model.  With the '57, it was becoming clear that Chevy had big, sporty plans for the line.  Personally, this is one of my favorite Corvettes of all time.  I love pretty much everything about this model, from the classic styling, to the open-air roadster design, to the surprising amount of beef under the hood.  I can't even look at this car without picturing myself zooming down the PCH with the wind in my hair or cruising the city streets on a hot August night.  This car is coolness defined. 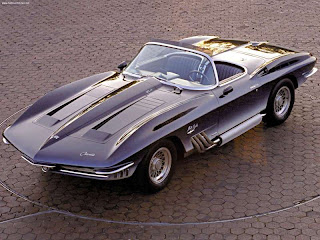 The XP-755 "Mako Shark" concept car was designed by Larry Shinoda as a concept for future Corvette production cars.  It was named and designed after the actual mako shark, which inspired the gradient color fading on the sides and the sleek, menacing profile.  At one point, designers actually considered "kidnapping" a mako shark so they could accurately reproduce it's color for the paint job, then returning it afterwards.  This concept car would pioneer the "2nd generation" or C2 Corvettes, and the styling of this concept would first see production in the 1963 model, which brings us to... 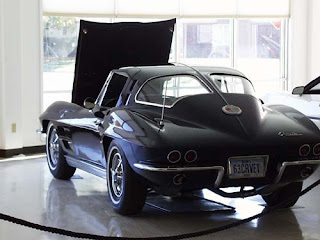 First off, I have to mention that this was my dad's favorite Corvette model ever, and it's one of my favorites as well.  The second generation Corvette saw radical styling changes, courtesy of Shinoda's "Mako Shark" concept, and also introduced the "Sting Ray" name.  The '63 was the only model year of the C2 to feature a split rear window, which is what makes it a stand out from the rest of the line, in my opinion.  The C2 line saw the Corvette change from being exclusively a roadster to sporting a closed-coupe.  There were also big changes under the hood as well.  The early years saw an upgrade to a 396ci engine, putting out 425hp, but things would really get crazy by the end of the model run, with the introduction of the 427ci big block, that was "rated" at 430hp, but actually put out a good 560hp at least.  The Corvette had officially gone from being a sporty roadster to an all-American muscle car. 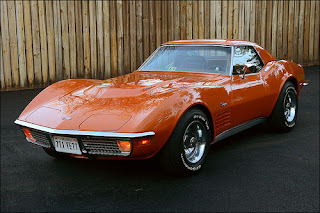 Another generation of Corvettes inspired by a "Mako Shark" concept, the C3 generation began in 1968 and the engine power arms race peaked with the 1969-1970 model years.  The 5.7L 350ci engine was replaced with a 5.36L 327, though hp output remained the same.  However, the gas crisis in the 70's would force some major changes to the auto industry and was essentially the end of the "muscle car" era, with most previously beefy and gas guzzling coupes and sedans trading their big blocks for smaller, less powerful engines and exchanging performance under the hood for added luxury and features inside the car.  The Corvette was one of the few high-performance sports cars to survive and continue to see success in spite of the gas crisis and it's eventual impact on the auto market, although it didn't make it through unscathed.  Engine performance was downgraded to comply with new fuel and efficiency standards, as well as the new SAE net horsepower rating system.  The days of the 560hp production Sting Rays were gone.  A notable feature of the C3 Sting Rays was the introduction of "T-Tops" to the Corvette for the first time, a styling design that would carry through to future generations.

The C4 generation of Corvettes would get off to a shaky start.  First, there were so many technical problems with the anticipated launch of the 1983 model, that all but one copy of the car were destroyed, with the one surviving model kept by GM and currently on display at the Corvette museum in Bowling Green, KY.  However, when the C4 line finally kicked off in 1984, it would be a rather underwhelming launch for a number of reasons.  One notable aspect of the C4 line was that the "Sting Ray" moniker had been dropped, ending a 13-year run of the label.  Beyond that, the car was far heavier and performed well below previous models.  At 230hp, the V8 engine offered less power than the inline 6-cylinder in the original 1953 model in a car that weighed twice as much.  On a personal note, I remember going to an auto show with my dad when the 1984 'vette first came out, it had a sticker price of $26,000 fully-loaded with a "targa top" and the "4+3" transmission.  The "4+3" was a 4-speed manual with 3 automatic overdrive gears, the first time any form of manual transmission was offered on the Corvette since 1981, when it was discontinued to meet fuel efficiency regulations.  At any rate, $26,000 for a brand new Corvette is crazy, even if it was, in my opinion, the shittiest Corvette ever made.  However, things would get better for the C4 'vettes... 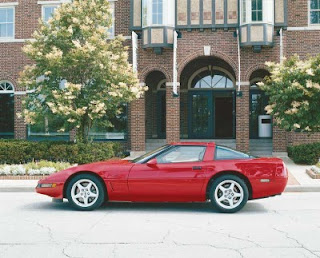 In 1991, the Corvette received some much-needed upgrades to body styling, interior and wheels.  Additionally, the 1992 model saw the introduction of the LT-1 engine, which gave the 'vette a long-needed performance increase.  Though still well below her glory days of the 60's, the base-model 1992 LT-1 'vettes were putting out over 300hp, finally deserving their twin checkered flags again.  The ZR-1 was the highest performance model of C4 Corvette available, putting out over 400hp, and still keeping the Corvette competitive with exotic supercars that cost 2-3 times as much.  Though the last production year for the C4 Corvette was 1996, 1995 was the last year of production for the ZR-1, which is, in my opinion, the best model of C4 Corvette produced, although the Calloway Corvette which was produced for the 1990-1991 years and basically inspired the ZR-1 deserves note as well.  The important thing was that the C4 generation ended on a high note, after taking off like a Lead Zepplin. 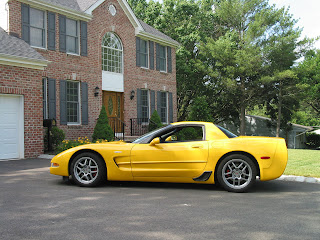 The C5 generation of Corvettes began in 1997 and ended in 2004 with this bad bitch right here, the Z06.  Beyond some significant styling upgrades, the C5 is also noteworthy for a new engine design, the LS1 - an all-aluminum engine chock full of new technology that enabled it to put out a rated 350hp while still averaging 28mpg highway mileage.  From 1997-2000, the C5 line was basically just the LS1 with various levels of optional upgrades, with no "high-performance" model available.  All that would change in 2001 with the introduction of the Z06.  The Z06 used an LS6 engine, which was based on the LS1 and put out 385hp.  By 2004, changes such as the use of titanium and carbon fiber to reduce weight and improve performance would see the LS6 for that year rated at 405hp, while also being far lighter and quicker than the C4 ZR-1, the last model to put out that much horsepower. 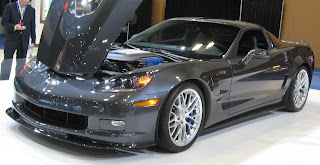 The C6 generation kicked off big.  First off, the base models with the new LS2 engines were rated at 400hp, or nearly as much as the C5's Z06.  Styling upgrades continued, including the reintroduction of fixed headlights for the first time since 1962.  Low drag and lots of lightweight construction materials helped the C6 put out stellar horsepower while still getting a good enough mileage rating to avoid the gas guzzler tax.  The C6 Z06 arrived in 2006 with an LS7 engine, which was a 427ci small block, rated at 505hp, the first production-line Corvette to break the 500hp mark since the golden age of the Sting Ray in the 60's.  In 2007, the return of the ZR-1 was announced, shattering the already amazing performance of the Z06, thanks to the 6.2L LS9 engine, which exceeded GM's performance goal of achieving 100hp per liter, by putting out 638hp.  This would also be the first Corvette to break the $100,000 mark, with a sticker price of $105,000 for the standard interior and $115,000 for leather.  The LS9 is the most powerful engine ever put into a GM production sports car, and the C6 ZR-1 has a top speed of 205mph.  The "muscle car" might have lost it's bulk over 40 years, but apparently it became a mean-ass UFC fighter, because this bad bitch right here rips it, big time.


For the next generation of Corvettes, GM has invited buyers of the 2011 Z06 and ZR-1's the opportunity to pay an additional $5800 to fly to the GM Performance Build Center in Wixom, MI, to help assembly line workers build the engines for their cars, and then accept delivery of their car at the National Corvette Museum in Bowling Green, KY, near where the Corvette's final assembly point is located.  The new C7 Corvettes will feature a base-model 5.5L engine rated at 440hp, which means performance for the ZR-1 could easily get near or even past the 700hp mark.  Another interesting feature of the C7 Corvette is the return of the "split window" rear window design, as an optional feature.  I'm personally very curious how this will look, as I'm a huge fan of the 1-year wonder '63 split window (as I mentioned previously).

We shall see how it all plays out when the new C7's hit dealerships this fall.  Until then, Happy Birthday to the Corvette, the longest-running American production sports car, and proof not only that you don't have to spend $300,000 on a car to get supercar performance, but that for that 1/3 of the price you can embarrass the hell out of someone who did.  AMERICA, FUCK YEAH!!!
Posted by Dave at 3:24 PM