The hypocrisy of "extremism" - A Tale of Two Shootings

I figured when I wrote my piece about Anders Breivik and his terror attacks in Oslo, Norway last week, that I was pretty much done with the subject.  I mean, I had discussed a perspective on the whole situation that I felt was interesting and worth considering, the idea of what if Breivik was labeled a "Christian terrorist" the way our media is so quick to label any terrorist of middle-eastern descent as a "Muslim terrorist"?  What would be the potential ramifications of this?  Could the non-Christian world react to Breivik's attacks the same way the non-Muslim world reacted to, say, the Ft. Hood shootings in 2009?  Would we have Muslim experts on "Christian" religion on news channels, discussing how Christianity is a religion of "hate", the way we see Christian experts on Islam speaking in broad generalities about the Muslim religion every time there is a terror attack by a person of the Muslim faith?

Of course, I already knew the answer to those questions.  Of course not.  Not in America at least, and certainly not in any other "Christian" nation.  It's just common sense, really.  I mean, it's not as if you see "Muslim" terrorists being vilified in Islamic nations.  It's human nature.  Nobody is going to affix a label to the acts of an extremist that also identifies your own beliefs.  You won't see Muslims condemning "Muslim terrorists", though they may condemn the act, the won't affix the label "Muslim" to the person who committed the act.  Likewise, you won't see Christians calling Anders Breivik a "Christian terrorist".  They may call him a terrorist or even an extremist, but they're not going to put themselves anywhere near the side of the fence Breivik is on by also affixing the label "Christian" to him.

And that's all fine, really, if only we could just be honest about that as a society.

Now, I don't think that it's unreasonable to say that Anders Breivik does not represent the widely-held beliefs of the majority of the Christian community, either in America or around the world.  I was raised as a Christian and I can honestly say that Breivik's actions do not reflect any ideology that I was ever exposed to growing up in the church.  However, the fact is that Breivik did, indeed, consider himself to be a Christian.  His ideology was driven largely by that Christian faith and the far-right, culturally conservative views that went hand-in-hand with those religious beliefs.  Does this mean that all of Christianity should be held accountable for his actions?  Of course not.  I don't think any reasonable person would make such an accusation.  However, what about Nidal Hasan?

Nidal Hasan is the man responsible for the Ft. Hood shootings in 2009.  That attack resulted in 14 deaths and 29 injuries - only about 1/4th the devastation of Breivik's rampage, but no less horrifying and despicable.  Hasan has been characterized as a "Muslim terrorist" in the media even before his faith was verified.  This is not surprising, though - before Breivik was identified in the Oslo attacks, his actions were immediately characterized as a "Muslim terror attack" or the work of "Islamic extremists" as well.  Even when his identity and religious affiliation was made public, there were still news agencies trying to tie his actions in with some sort of attempt to copycat Al Qaeda.  Even today, there is still a concerted effort by some in the media to continue to try and link Breivik's ideology to those of Islamic extremists, even though he was very open about his strong anti-Islam, anti-Muslim prejudice.

With Hasan, though, there was never any doubt.  Learning of his religious beliefs and extremist ideology only confirmed what everyone had suspected from the start.  See, it's not surprising when a Muslim commits an act of terrorism, because... well... that's what Muslims do, isn't it?

But with Breivik, you had the most unbelievable attempts to spin, weasel, justify and outright distort the facts about his beliefs, his motivations and the attack itself in order to put as much distance between Breivik and his religious and political views as possible.  You had the pundits and broadcasters in the conservative media asking "How do we know this guy is even a Christian?  What, because he says he's a Christian?"

Then, there's also this: 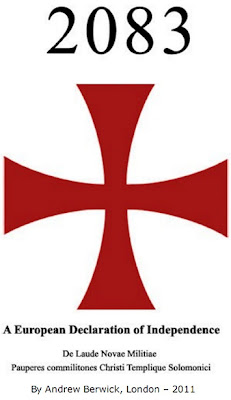 Breivik's 1,516 page manifesto, where he outlines his plan to instigate a new European civil war, that would last for decades and ultimately result in the extermination of European Marxists and the expulsion of all Muslims from Europe.  In this manifesto, Breivik refers to himself as "The saviour of Christianity" and "The greatest defender of cultural conservatism in Europe since 1950."

"How do we know this guy is even Christian?  What, because he says he's a Christian?"

So yeah, when a guy says he's a Christian and writes a 1,516 page manifesto about his specific, Christian-based ideology and calls himself "The saviour of Christianity", you can assume he practices the Christian faith and is of the Christian religion.

I mean, all Hasan had to do was say he was a Muslim and that was good enough for the American media to brand him an "Islamic extremist" and a "Muslim terrorist".  He didn't write a 1,516 page manifesto, but he did make a phone call to Anwar al-Awlaki, a man linked to other attacks by radicalized Muslims, and that was all the proof that was needed.


Now, before you jump to the conclusion that I'm casting any aspersions against the Christian faith, let me assure you, I'm not.  I'm simply saying that there is a hypocrisy in our media and our society where we are quick to condemn one entire religion due to the actions of some of it's extremist and misguided followers, simply because it is a "foreign" religion in our country, but we make all the excuses, leaps of logic and spin in the world to separate the actions of an extremist who is Christian from the mainstream Christian faith.

When it comes to groups like Al Qaeda, that's one thing.  Obviously, when you're talking about a vast terrorist organization, you have to hold all members and sympathizers of that group accountable for it's actions.  Just like if we were talking about the KKK and the atrocities committed by it's members against blacks, minorities and homosexuals.  Even though the KKK is a group with strong Christian beliefs and values, their actions do not represent mainstream Christianity and they are denounced as being a hate group.  I believe, simply, that the same standard should be applied to hate groups who happen to practice Muslim beliefs as well.  Judge the person, judge the organization, but don't judge the entire religion.

I am fortunate enough to know people of the Muslim faith, and they are all, without exception, extremely opposed to and disgusted by the violent actions of those who call themselves Muslim but are really just terrorists with a misguided ideology.  They view the actions by groups like Al Qaeda the same way Christians view the actions of groups like the KKK.  They view incidents like the Ft. Hood shooting the same way Christians view Breivik's attacks in Oslo.

I think we need to stop this media "denial" about who Breivik is and what he believed.  I think we need to start being honest about the fact that this was just a guy with some twisted, misguided and hateful beliefs, who felt somehow justified in his hatred because of his distorted view of his religion and his political ideology.  He was an unstable individual who used violence to carry out his agenda and behaved in a way that civilized people simply do not.  He acted in a manner that does not represent the majority of people on this planet, regardless of their beliefs.  He was a violent extremist with a screwed up way of thinking and a warped sense of justification.  His actions are shameful and should never be condoned or tolerated in any society, and anyone who sympathizes with or shares his extremist ideology should be treated the same way.

If we, as a nation, are truly not at war with Islam, then we need to start making it more clear in our media coverage of acts like this.  Because, right now, there is a clear double-standard that extends beyond simply the conservative media.  It's feeding into a national ignorance and it's only serving to fuel the very flames of hatred and distrust that it claims to be decrying.
Posted by Dave at 4:52 PM