Today I want to talk about 3 awesome things that came from the Philippines that aren't Manny Pacquiao, Tim Lincecum's mom or cute girls who can't pronounce their P's and F's very well.  Well, actually I want to talk about 4 things, 3 of them, of course, are delicious Filipino dishes, because you know I love food.  The last awesome Filipino thing is the person who makes these 3 dishes better than anyone I've ever met.  In fact, she's the whole reason I know about 2 of these 3 dishes in the first place.  She's also the inspiration for my blog post today and a very dear friend and amazing person, Krystina.

First, a little bit about Krys.  Like most Filipino girls, she's beautiful.  It's something in the water, I think.  I dunno what it is, but it combines with human DNA to make super cute girls.  Also, she's very funny and intelligent, which I credit to the fact she spent much of her life in the Philippines and not in American public schools.  I first met her a little over 10 years ago when she began dating one of my best friends, Billy.  They were soon engaged and it was at their wedding that I was treated to 2 of the insanely delicious items on my list.  The first one is Lumpia.

Lumpia - A pastry of Chinese origin, similar to a spring roll, made popular in Indonesia and the Philippines, where Chinese immigrants from the Fujian province eventually settled.  The most popular (and delicious) variety is known as the "Lumpia Prito", which is pictured above.  These are fried lumpia, filled with finely-chopped vegetables, bean sprouts and tiny pieces of diced seafood, chicken or beef.  Often served with a spicy-sour dipping sauce or toyo-mansi, which is soy sauce mixed with calamondin juice.  However, they are delicious all by themselves as well.

I first became aware of the Lumpia when I was a young boy.  My mother went to church with a Filipino woman named Ennie, and our families were friendly and would occasionally get together and visit.  On one occasion, Ennie served Lumpia Prito, and my dad and I went bananas on them.  We literally could not stop eating them.  Now, I was just a young kid, maybe 6 or 7, and anything that even remotely resembled a vegetable was disgusting to me.  However, I could not get enough of these mostly vegetable-filled suckers into my cake hole.  My dad, of course, asked Ennie for her recipe and, about a week later, I watched as he prepared a whole mess of them according to her recipe.  It was then that I realized the one important thing to note about preparing Lumpia Prito - It's a lot of work!

First, you have to pre-cook the filling.  The cooking itself isn't so bad, but finely chopping and dicing all of the meat and vegetables first is very time consuming.

Second, you have to prepare the "lumpia wraps".  These are very thin spring roll wraps that must be kept from drying out, usually by laying a damp towel over the stack, while you roll each lumpia.  This takes a surprisingly long amount of time, at least when you aren't an expert at doing it.  You place a small, even amount of filling onto each wrap, roll it up, tuck-fold the ends and wet the edge of the wrap to seal it.  Then, you set it aside and repeat about 50 more times because if you only made 20, you didn't make enough.

After you have rolled up all of your lumpia, you then fry them in oil just like any other spring roll and serve with your choice of dipping sauce.

When I say lumpia are good, it's like saying sex is ok or taking that first pee in the morning isn't bad.  It's a huge understatement!  Lumpia Prito is probably one of the most delicious and addicting finger foods I've ever had in my entire life!  I could literally eat my weight in these things.  I could eat them until my stomach exploded, and then keep eating them until I filled up my hollow leg.  At Bill and Krystina's wedding, there were huge trays of lumpia set out at the reception, along with a host of other delicious foods that represented both Krys's Filipino culture and Bill's Portuguese/Okie culture.  When I say a huge tray, I'm talking those disposable aluminum trays that caterers usually fill with piles of sliced meat, a baked side or a ginormous mixed salad.  There were so many lumpias that this thing was perpetually 2/3rds full the entire evening and I think I might have eaten about 45 of them, no exaggeration.  I got to the point where it hurt to eat, but I couldn't help myself.  If I ever end up on Death Row (The place, not the record label), my last meal is going to include about 30 lumpias.


The second thing of distinctly Filipino origin that was present at the legendary wedding reception of Krys and Billy was a massive bowl of Pancit. 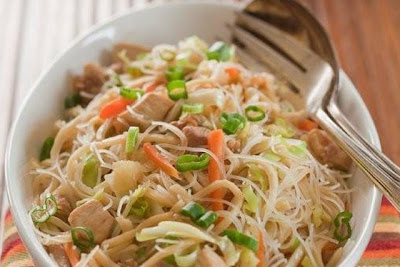 Pancit - Filipino noodles, cooked a variety of ways and with a number of different ingredients.  The most common type of pancit is pancit bihon, which is a very thin rice noodle, fried with soy sauce and citrus and mixed with thinly-sliced meat and vegetables.

Pancit is a lot like chow mein.  In fact, it is to chow mein what Filipino's are to the Chinese - thinner, darker and much harder to say no to after you've had a few beers.  (I keed, I keed!)  Seriously though, pancit is delicious!  The first time I ever had pancit was at Bill and Krys's wedding, and I freaked out on it kinda because it was so flavorful that it almost distracted me from the lumpia, which as we all know is sacrilege.  Since then, throughout my ongoing friendship with Krys, I have been fortunate enough to have her homemade pancit at least a dozen more times and every time it tastes just as good as the last.

Pancit is another dish that requires a lot of preparation to thinly slice the meat and vegetables, though not nearly as much as lumpia prito.  It's incredibly flavorful though and can incorporate a variety of vegetable and meat choices (or no meat at all).  Much of Filipino cuisine is based on practicality, making a relatively small amount of inexpensive ingredients go a long way.  Hence, the finely-chopped and thinly-sliced nature of most meat and vegetables in Filipino dishes.  However, the up-side to this is a wonderful amount of flavor and unique textures that having a little bit of meat, vegetables and noodles in every bite gives you.


The 3rd amazing Filipino dish that I was treated to by Krystina was first prepared for us when we visited Krys and Billy in their first apartment just after they were married.  It was here that I had my very first taste of adobo. 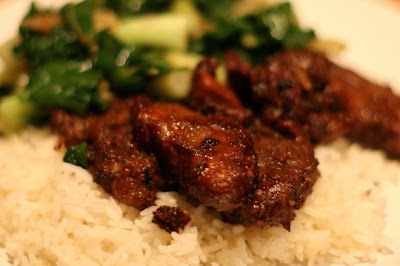 Adobo - A popular Filipino dish, prepared by the cooking method of the same name.  It is basically meat or seafood, marinated in vinegar, peppercorns, soy sauce and garlic, browned in oil and then simmered in the marinade.  The name "Adobo" was first given to this cooking method by Spanish conquistadors when they first conquered the Philippines in the late 16th century.  They observed the Filipino people preparing their meat by stewing it in the vinegar, peppercorn, soy sauce and garlic and referred to it as "adobo", the Spanish term for "marinade".  The original Filipino term for the cooking method was lost as the term "adobo" came to be the name given to all meat dishes prepared in this manner.  Traditionally, the meat used in adobo is either chicken, pork or seafood, although beef adobo is a commonly made meal as well.  Adobo is usually served over steamed rice.

The first time I ever tasted adobo, I was blown away by how intense the flavor in the meat was.  The marinating and cooking method imparts a tremendous amount of flavor from the garlic, acidity from the vinegar and saltiness from the soy sauce.  It's not overpowering, just very strong in flavor.  Serving the meat over steamed rice seems like the best possible preparation method, as the neutral starchiness of the rice cuts the intensity of the adobo and creates a hearty, satisfying combination.

Out of the 3 dishes I've listed, I've had adobo the least.  It's unfortunate, because it's very good.  I've only ever had adobo prepared by Krystina, in fact, so my entire positive opinion of the dish is based entirely on her skill as a cook.  Then again, I can say the same thing about pancit, I've only ever had it prepared by Krys as well.  Damn, that girl is a hell of a good cooker of Filipino yumminess!


When I think about lumpia and pancit, I think about the wedding reception for Krys and Billy.  I remember that night fondly.  It was and still is the best wedding reception I've ever attended.  The food was amazing and there was so much of it.  There was copious ice cold beer, courtesy of the keg on ice and even a DJ.  It was held in the un-fenced backyard of Bill's grandparent's house, on the corner at the entrance to our neighborhood and people from all over town would drive by, realize what was going on and who's house it was at and stop by to say hello, wish the newlyweds well and grab a lumpia or 3 on their way out.  It was an amazing and wonderful night.  There was even a little bit of trademark drama in the grocery store parking lot across the street, which I won't get into so as not to embarrass anyone, but suffice to say if you knew Billy and you knew how we all got down back in the day, you know that this night couldn't have possibly gone any different, or any better.  Krys wasn't just marrying Billy that day, she was marrying all of us.  Krys is a wonderful person and someone I am proud to call a friend to this day, and that night was special for so many reasons, not the least of which was the amazing culinary contributions made by her family.

We lost Billy not long after he and Krys were married.  It was a devastating loss for all of us, Billy was one of the best friends I've ever had.  However, thankfully Krys stayed in our lives.  She eventually found love again with my good friend Mike and the two of them have two beautiful children together.  To this day, whenever there's a big get-together over at Mike and Krys's house, you can count on there being a big bowl of pancit to go with the tri-tip Mike will be grilling up.  Thus carrying on the rich tradition among us crazy fuckers of combining the best of country, redneck grilling with the deliciousness of Filipino cuisine.


I want to thank Krys for inspiring this post today.  For as long as I've known her, she's been a good friend and a wonderful person.  She's beautiful, intelligent, funny and one hell of a shit-talker.  She learned well how to bust balls with the rest of us, perhaps a little too well...  She's a loving mother and most definitely one of the best cooks who's food I've had the pleasure of eating.  She gave me my very first tattoo, which I still love as much as I did the day she slapped it on me.  She's a gifted and talented woman who, with a little help from papa Mikey, is raising two gifted and talented children.  I'm grateful that Krystina is still a part of our lives, not only would things just not be the same without her, the food would suck a lot more!