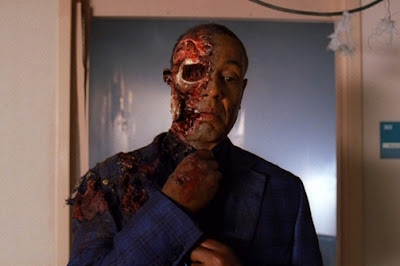 Best season finale in the shows history, so far.

This is how you do it.

I don't even have anything else to say.  I'm still fired up over last night's episode and I can't believe the season is already over.  Now comes the long, painful wait to see what they do next season now that Gus is dead, his lab is destroyed and it looks like Walt and Jesse might finally be out of the game... or are they?

Just... damn.  Dude fixes his tie with half of his face blown off before he drops, that's a gangster right there.

If you aren't watching Breaking Bad, you're failing.
Posted by Dave at 3:15 PM