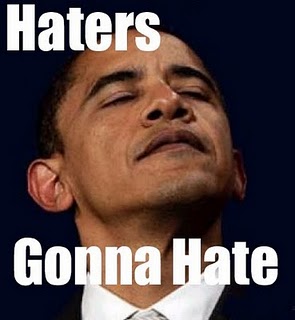 What does this mean?  For the same approximate annual cost as the war in Iraq and minimal troop presence in Afghanistan from 2001-2008, the Obama administration has conducted full-scale military operations on both Iraq and Afghanistan with only 1/8th of the casualties to American and coalition military men and women.

What did the Republicans have to say about Obama's foreign policy, his ability to be commander-in-chief and his probability for success in these military efforts?


"I would not have intervened [in Libya]"

"Dithering" = Killing Bin Laden and all his successors as soon as they pop up.

Cain giving credit to Bush for Gadhafi, even while admitting Obama's leadership provided the most U.S. support.  Funny, they still credit Bush for all of the good things that have happened in the last 3 years, but that stock market crash?  Those bailouts?  All the financial corruption and job loss that nearly bankrupted our country and put 14 million out of work?  Nope, not Bush's fault, that was 2008, this is 2011!

Honestly, it doesn't surprise me that the Republicans didn't give Obama credit for giving the order to take out Bin Laden.  Nor does it surprise me that they're somehow trying to tie the death of Gadhafi to Bush when Bush wasn't even trying to get Gadhafi.  Dude had a fucking high school crush on Condoleeza Rice for crying out loud.  It doesn't surprise me that the Republicans want to give Bush credit for all of Obama's foreign policy successes, even though they were shitting all over those policy decisions when Obama made them just a few short months ago.  It doesn't surprise me that Republicans want to rewrite history and lay the entire stock market collapse at Obama's feet when it happened a year before he took office.  That they want to completely absolve Bush and the Republican party from any culpability in the market collapse, the first bank bailout and the $10+ trillion in debt that they handed over to Obama on inauguration day.  None of this surprises me because this is how the Republicans roll now.  Everything good that happens during Obama's term is really all because of stuff Bush did, even if he didn't do a damn thing on the subject.  Meanwhile, everything bad that happens during Obama's term - including the catastrophic economic mess he was handed directly by the outgoing administration has nothing at all to do with Bush.

Bin Laden dies on Obama's watch - Nope, it was all due to Bush policies that just took 9 years to kick in, that's all.

Gadhafi dies on Obama's watch, thanks to Obama pledging support - despite strong and vocal objection from every GOP candidate and many prominent Republicans - Nope, it was all due to Bush, even though they really hated the idea at first, since it worked it was actually all Bush's doing, never mind that there was no policy on ousting Gadhafi then, it's still all because of Bush.

During the campaign, the Republicans warned us that America would be "less safe" under Obama.  They told us Obama would be a "weak" leader.  Mitt Romney just this week called Obama's foreign policy "timid".  Every GOP candidate and many Republicans in congress criticized Obama's decision to offer support to the Libyan rebels.  From day one the Republicans have told us over and over that Obama was not prepared to be commander-in-chief, that his policies would fail, that we would be less safe and less protected under his watch, that the terrorists would be emboldened and gain strength due to his weakness.

Bin Laden:  Dead
Gadhafi:  Dead
Anyone who has tried to succeed Bin Laden in Al Qaeda since his death:  Dead