The 80's was a special time for cheesy sci-fi movies.  CGI was still a twinkle in The Last Starfighter's eye, so they couldn't use a few computers and some DeVry graphics majors to compensate for a small budget.  They had to make props on the cheap, find an isolated enough patch of desert to create a post-apocalyptic wasteland or barren, alien planet without some dirt biker buzzing through the background or something.  Then there was the plot.  Most of the post-apoc 80's films were about the never ending hunt for drinkable water.  In the post-nuclear world, water is the most precious resource on the planet.  Typically, this also means there is an evil overlord of some kind who controls a bunch of water and usually a small army of freaky looking dudes as well.  Of course, there could just be some grander scheme to things, but this provided a pretty solid template for some major 80's future cheese.  Without further ado, here are 5 great (awful) movies from that golden (crappy) age of sci-fi! 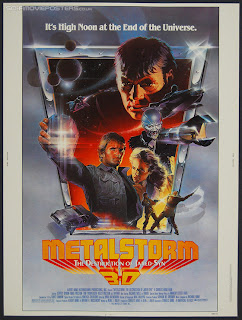 4.  Spacehunter: Adventures in the Forbidden Zone 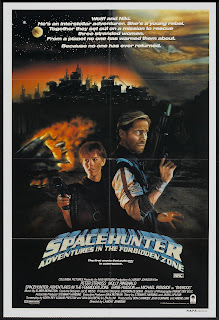 All this new 3D hype is just a remix of these old school pioneers!  Of course, the 3D back then sucked ass compared to the technology now, but I think it's kind of awesome how cheesy sci-fi totally embraced 3D.  Then again, when the plots were as terrible as these movies, I suppose the 3D kind of has to be the star.  People think that Molly Ringwald's career fizzled because John Hughes stopped making movies for her to be in, but I suspect that people started watching this sucker and realizing she was serious when she made it... 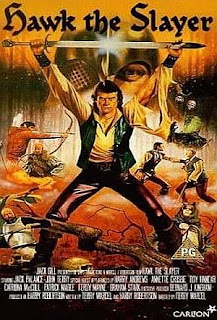 Ok, so this one isn't exactly a "sci-fi" movie, but it isn't exactly a medieval one, either.  It's got glowy, futuristic-looking crap and they clearly stole the imprisonment rings from the first 2 Superman movies, plus the world of "Hawk the Slayer" exists "beyond the edge of darkness" or some crap, so I assume it's like an alternate universe or other planet or something.  Anyway, it's cheesier than all hell and it's got Jack Palance in it, so it deserves to be here just on that alone.

2.  Yor: The Hunter From the Future 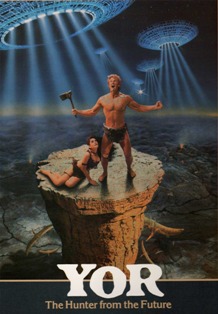 So, what was the deal with cheesy 80's movies being titled "So-and-so: The stuff after the colon"?  In this list, 3 of the last 4 films follow that titling format and really, I suppose Hawk the Slayer could very easily be Hawk: The Slayer, too.  Not complaining, because it's just one more layer of gooey cheese on this pizza pie, but I think it's kind of interesting to note.  Oh yeah, and Yor combines prehistoric cheese with crazy time-travel sci-fi cheese in a way that was obviously so clearly successful that no one has dared even attempt it since.  That's film making! 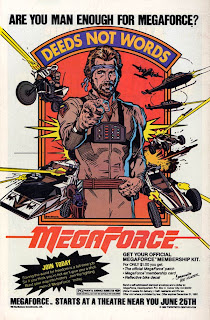 So Megaforce isn't exactly a futuristic, post-apocalypse film, either.  However, it's about an elite fighting force that uses super high-tech weapons and equipment that is basically just regular old 80's off-road vehicles with extra plastic crap bolted on and that's really the foundation for every great cheesy 80's sci-fi movie.  Plus, it's got awesome 80's hair, powder blue bandannas and the greatest line ever: "The good guys always win, even in the 80's!"  I remember wanting to see this movie so badly as a kid because of the flying dirt bike and then it's only in the movie for about a minute and I was totally disappointed.  This movie had a ton of hype when it came out, you could join the Megaforce club and get like a bike decal and crap and I believe there was even a Megaforce game for the Atari 2600.  For cheesy cross-promotion of a cheesy movie about cheesy 80's "futuristic" tech and bad-ass cheesy 80's hair and pastel accessories, Megaforce wins this list.