I'll say this about Kim Kardashian...

She really does a fantastic job of pointing out the sheer hypocrisy of those who defend the "sanctity" of heterosexual marriage. 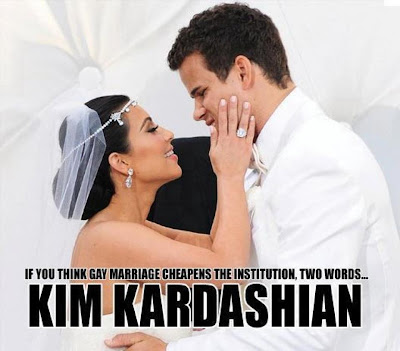 Like most of my facebook friends, I've re-shared this picture.  Of course, Kim is just the latest in a long line of celebrities who change spouses more often than most people change the oil in their cars, but her recent divorce after 72 whole days of wedded bliss does provide a great opportunity to point out just how idiotic and hypocritical the people are who oppose gay marriage out of some sense of obligation to "defend" traditional marriage.

According to several sources, Kim made a killing off of her wedding, financially.  Between the gifts that were donated just so she could be seen using or wearing them to the commercial spots during her wedding show that were sold for $100,000.  Some have estimated that she made millions of dollars in profit from her lavish, "fairytale" wedding.  This morning, on the Today show, Kim's mother Kris defended the legitimacy of her daughter's two and a half month marriage as part of her tour to promote her new book... yeah, that sounds about right.  Of course, Kim is in Australia doing a bunch of promotional appearances as well, clearly as a means of dealing with the "grief" of her "fairytale" wedding coming to an end after 72 long and meaningful days.  There's another great Kim K pic that's been making the facebook rounds that I like as well: 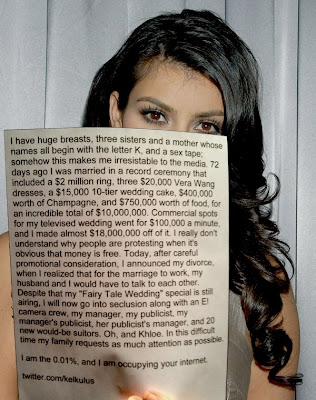 While this whole marriage scam - and I don't care what any of the attention whores in the Kardashian family say, this marriage was absolutely a total and complete scam to make money and get ratings for their reality show pseudo-life - has been great fodder for those, like myself, who are sick to death of people being exalted into celebrity status for no discernible reason other than because they keep shoving themselves in front of cameras, it really just shows how little marriage actually means to most heterosexuals in this country.

For as long as there have been celebrity weddings, there has been public display after public display of how cheap the institution of marriage has become.  From as far back as Liz Taylor and her multiple weddings to guys like Johnny Carson and Larry King, to people like Britney Spears who was married the first time for a weekend and the second time for just long enough to pop out two kids, to Dennis Rodman and Carmen Electra's famous week-long nuptial train wreck, celebrities have a rich history of shitting all over any so-called "sanctity" of the institution of marriage.

However, it's not just celebs who treat marriage with little to no respect.  The divorce rate in this country is 52%.  That means over half the people of marital age, who have gone through the act of making a "til death do us part" commitment in front of their God, their families and their loved ones have taken a big steaming dump on that commitment.  Now, I'm not saying this out of disgust or judgment for those who have been divorced, I personally don't see anything wrong with people realizing that maybe they weren't meant to be together for life after all and cutting their losses.  Shit happens, people change, yadda yadda yadda.  My problem is that clearly a large segment of our population who doesn't hold marriage to a revered status in their own lives are perfectly comfortable imposing some arbitrary code of ethics and standards on others.

Look, I don't care if Kim Kardashian wants to make a business out of getting married over and over on tv.  I don't care if Larry King wants to get married and divorced 3 more times before he dies.  I don't care if they bring back "Who Wants to Marry a Millionaire?" again.  Just admit that marriage isn't "sacred" to over half the people in this country and it's barely sacred to the half that haven't been divorced and stop hiding behind some false morality as your excuse for being an ignorant homophobe.

If you're cheating on your spouse, you have no right to say any two people who love each other and will actually be committed and faithful to each other can't get married.

If you've ever been divorced and thus violated the "sacred" and eternal bond of holy matrimony, you have no right to say that allowing gays to get married will damage the "sanctity" of marriage.

If you married your spouse for money, citizenship or any other reason besides a deep and sincere love for each other, then you have no right to pass judgment on anyone who does want to get married for those reasons.

Marriage is a joke to the heterosexual community, clearly.  Over half of them end in divorce, people are doing it for money or other personal gain, people do it to get tax breaks, health care and other benefits, people do it on a drunken weekend in Vegas only to annul it on Monday... I mean, enough with the bullshit already.  Either admit that you are opposed to marital equality because you hate gay people or shut the fuck up about it and go away.  Oh and as long as we're on the subject of shutting the fuck up and going away, take the Kardashians with you, ok?
Posted by Dave at 12:16 PM