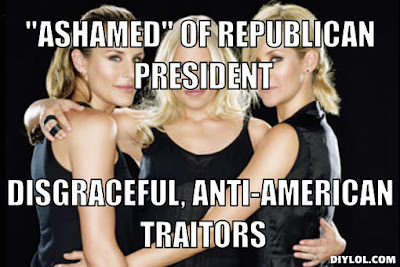 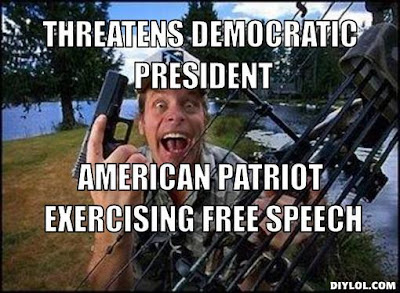 Recently, venerable rocker and bow hunting enthusiast Ted Nugent provoked a firestorm of controversy when he made a very thinly-veiled threat towards President Obama at an NRA conference earlier this month.  Nugent told the crowd "If Barack Obama becomes the president in November again, I will either be dead or in jail by this time next year."  What followed was the cancellation of a scheduled concert at Fort Knox and a personal visit by the secret service to interview Mr. Nugent and assess the potential validity of his threat.

Now, if Ted Nugent wants to say stupid shit, that's his right.  Of course, one thing you don't have the right to do in America is physically threaten the president.  The secret service spoke with Nugent and didn't determine him to be a real threat to the president's safety, so the criminality issue of Nugent's statement is resolved as far as that goes.

However, there is the whole public opinion issue and how people would react to an entertainer who makes such a hateful and disparaging remark about a sitting president during a time of war.  I mean, remember how badly things went for The Dixie Chicks when singer Natalie Maines said she was "ashamed" to be from the same state as then-president Bush.  Outraged fans and conservative haters turned out in droves to burn Dixie Chicks CDs and the group suffered severe financial consequences for that statement.  Further, Fox News made the group the poster girls for "Radical, left-wing, anti-American hate speech" and likened their comments to treason.

In contrast, other than the decision by Fort Knox to cancel Nugent's appearance at the concert there, the reaction by conservatives has ranged from non-existent to staunchly defensive of Nugent's statements.  The financial impact of Nugent's remarks has been minimal at best and, if anything, Nugent's fans have been ignited to rally around the rocker and show their support for his vile and hateful comments.

Now, we all know why it's ok with conservative music fans for Nugent to threaten Obama and why it was absolutely unacceptable for the Dixie Chicks to criticize GW Bush, because the Dixie Chicks didn't know their place.  See, if you're a country music artist or "southern rocker", you're supposed to know who your fan base is - largely conservative and Christian middle-Americans - and you must appease them.  You have to sing about God and country and family and America and you have to support conservative ideals, at least publicly.  You can be a liberal and vote Democrat if you want, just don't be all "out" about it.  Much like gays, liberal country artists are expected to stay in the closet and keep their views to themselves.

Like I said, we all know this.  Liberal musicians and actors in other genres are freely and openly critical of conservative and Republican politicians and pundits and their careers are none the worse for wear for it.  But, country music, "southern rock" and other traditionally conservative forms of entertainment hold no tolerance for that shit.  Just like when NASCAR fans booed Michelle Obama and Jill Biden a few months ago.  If you're going to be a fan of those forms of entertainment, then you better know your place.

Because of this, my problem doesn't exist in a vacuum where there should be no difference between the prevailing political affiliation of the fans of one form of entertainment vs. another. I fully accept that country music, southern rock and NASCAR are among the entertainment properties staked out by conservatives.  My issue is with the blatant hypocrisy that those conservative fans are showing by being dismissive or outright defensive about Nugent's extremist and hateful statements while excoriating the Dixie Chicks for making a far less controversial statement.

Why is it ok for Ted Nugent to basically threaten to try to assassinate the Democratic president but it was completely unacceptable and treasonous for the Dixie Chicks to be embarrassed of the Republican one?

Why is making a veiled threat against the sitting Democratic president during a time of war ok with conservatives, but expressing shame and embarrassment towards the Republican president under the same conditions is tantamount to an act of terrorism?

Saying that you're "ashamed" of the Republican president might be career suicide for a country music artist, but insinuating that you would be arrested for, or killed while attempting to physically remove the sitting president should he be re-elected should be career suicide for ANY public figure in ANY genre of entertainment.  Making threats against the president is NOT protected speech under the first amendment.  Anyone defending Nugent's comments as acceptable is either a complete idiot or a hypocrite.