Krull, why do you kick so much ass? 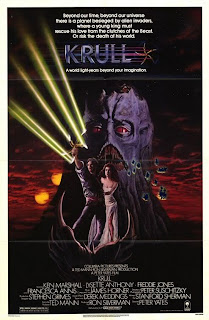 I was 8 years old when Krull

came out.  I remember the movie critics kind of trashing it, saying it was stupid and didn't make any sense and bashing the fact that it was a medieval world with alien invaders or something to that effect.  To me, all the reasons they didn't like it were reasons I thought it would be awesome!  I mean, what isn't badass about swords and sorcery vs. evil space aliens?  I could watch King Arthur kick E.T. in the balls literally for 14 hours straight.  So, the more I heard about this movie, the more I wanted to watch it.  Finally, mercifully, it came out on HBO and I was able to see for myself what the critics had been hating on, and just as I suspected, the critics were fucking idiots!  Krull is magnificent, for so many reasons. 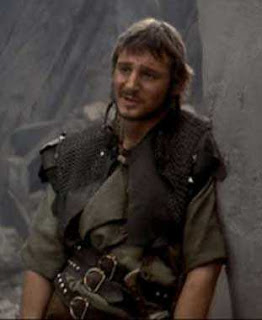 Sup?  I hear your princess has been kidnapped?  I'm pretty good at finding girls who have been... Taken

?
Oh yeah, you already know you're about to watch a good movie when Liam Neeson is in it.  You know what I was saying before about Ryan Reynolds sucking and ruining every movie he's in?  Well, if he was in a movie with Liam Neeson, Liam wouldn't let that shit happen.  His awesomeness would overpower Reynolds suckery and create a movie that was still kick ass in defiance of Ryan's toxic, movie-killing aura.  The resulting paradox could open a rift in the time/space continuum, but Liam would be like "Knock that shit off!" and the rift would close and be like "Sorry Liam, you kicked ass in Gangs of New York

!"  Liam plays Kegan, a member of a band of escaped convicts, led by Torquil, played by Alun Armstrong.  Liam was like "I don't need to be the leader of this band of convicts, I got the rest of my life to be the hero bad ass leader dude, you go ahead and take this one, Alun, I'll just hang out back here and fuck shit up and then heroically die at the end because that's what bad asses do."

Hell yeah I'm stoic, look into my EYE bitch!
Cyclops dude, otherwise known as Rell, and played by Bernard Bresslaw, is a bad motherfucker.  First off, the cyclopses on planet Krull are cursed.  They made a deal long ago to be able to see the future, but they got rolled and the only future they are able to see is their own deaths.  So, this dude knows all along exactly how he's going to die and he still agrees to join the PUG that's forming for the black fortress raid.  Dude's like "If that awesome spear drops, I'm rolling need."  Liam's like "You already got one, dick, don't be a loot whore."  So then he's like "Ok, but I'm rolling on leather armor."  Liam's like "You're in a party full of rogues, good luck with that!"  So then Rell was like "Fine, I'm just going to stay here in the swamp and keep farming herbs."  They were all like "Ok, see ya." and then at the last minute he was like "Ok, fine, I won't roll on leather armor, but if a necklace of cyclopean stature drops, you know that shit is mine!"  Bam, I just referenced two MMORPG's in one paragraph, and alienated about 90% of the people reading this right now.  Score.  Anyway, this dude is a hardcore fucker.  He knows how he's going to die and he never says shit to anyone, and then when they finally get to the black fortress, he gets crushed holding the door open for them.  How lame is that, really?  He goes on this raid and doesn't even make it to the first pack of trash mobs before getting owned.  Seriously, gear check homie...  Anyway, for knowing he is going to die, still going along anyway, and saving his group the whole time, cyclops dude is a bad ass.  Plus, he totally rapes a doppleganger with his spear by throwing it like a track star, can't fuck with that. 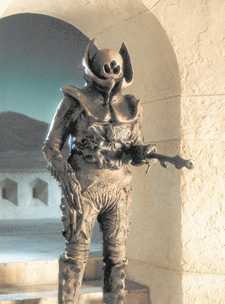 [Knock Knock] "Did somebody order a AAAIIIIEEEEEERRRGGHHH!!!!"
Slayers are the stormtroopers of The Beast - the villain of the movie.  Ostensibly, they are heavily-armored foot soldiers who carry laser rifle-looking weapons and walk around slowly, fucking up everything in their path.  However, when they are mortally wounded, they let out a piercing shriek and their armor appears to fall, emptily to the ground while a small, blood red creature, similar in appearance to the chest-burster larvae from Alien falls out the bottom and burrows into the ground.  Who knows where these gross little fuckers go once they burrow in the ground, of if they just die there or what, but they never come back, at least not during the movie.  At any rate, these dudes have the alien technology - laser rifles, and they use them to completely ruin the combined forces of both king's armies shit, and then ruin the kings' shit too.  The only one left alive after their wedding massacre/kidnapping is the hero, Colwyn, and only because he used feign death to drop aggro.
4.  The Glaive 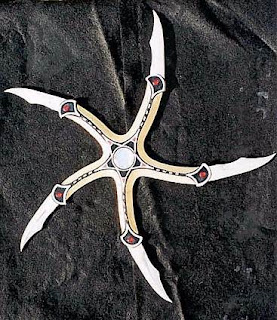 Thrown Weapon
+5% Crit
+5% to hit
Chance on hit: Impale target for double damage
Found in: Lava Caves
The co-star of Krull isn't Lyssette Anthony, it's this son of a bitch right here.  The first step of Colwyn's raid on the black fortress begins with gearing up, and that means he has to do a side quest to find the Glaive before he can take on The Beast.  After getting the quest from Ynyr back in the castle starter zone, he has to travel to the high peaks nearby, find the lava cave and then search it for this weapon.  Completing this quest gives a full level of xp and the Glaive, which can be used to weaken The Beast during the black fortress encounter.  Unfortunately, in spite of being prominently featured in every promo for this movie, the Glaive has a pitifully small amount of actual screen time and really only gets used during the final battle and even then ends up stuck in The Beast and can't be retrieved and, seemingly, is destroyed along with The Beast and the fortress.  Very shitty and unceremonious ending for such a bad ass weapon if you ask me.  The Glaive deserved better, no one puts Glaivey in a corner!
5.  The Fire Mares 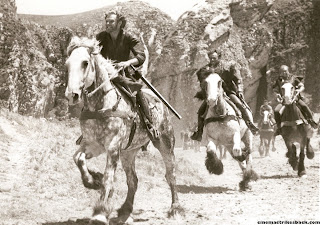 No, they're not Clydesdale's, they're FIRE MARES!
After completing the Glaive quest, Colwyn must now find a raiding party and begin the next step of the quest: capturing Fire Mares.  After spamming LFG in world chat for a few hours, he finally puts together a PUG with a bunch of rogues, a cyclops 2-handed warrior, 2 mages, a seer and a low-level noob that's just tagging along for credit and xp.  The lack of heals is going to make it a rough fight, but the rogues know first aid and the seer has some ok single-target heals, so as long as there are no high-damage encounters it should be ok.  Anyway, they have to go to this canyon and capture one fire mare each.  Completing this quest gives another level of xp and unlocks the Fire Mare mount, which is a very fast, epic mount, capable of traveling across the world map fast enough to beat the respawn timer on the black fortress.  Fire mares also have a cool particle effect where they light the ground on fire as they run, which looks really awesome with the graphics setting on high, but can cause lag on slower systems.

Doppelganger uses Sneak Attack (critical hit), you take 5873 damage (0 resisted), you are dead.
This creature spawns in the swamp zone and always targets squishy group members, such as mages in cloth armor.  It uses a claw attack that gains a bonus to crit and damage when the monster is behind the target.  If a player dies from the Doppelganger's attack, the Doppelganger will shape shift into the dead player and attempt to infiltrate his group.  If the group fails their saving throw vs. deception, they will be deceived by the Doppelganger and allow it into the group.  Fortunately for Colwyn, the cyclops Rell was out of group when the Doppelganger killed one of their mages, so he was not affected by the deception spell and ran up and killed the Doppelganger with his throw spear attack.  Unfortunately, the mage was bound on the other side of the map and it would take too long for him to rejoin the party, so he just logged and they had to carry on with only one mage. 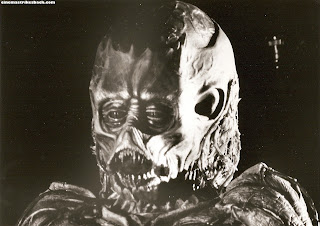 "King Koopa ain't got shit... on... me!!!"
The final boss encounter in the black fortress.  After making it past the trash mobs and traps in the labyrinthine black fortress, Colwyn finally reaches the lair of The Beast.  The Beast has 3 special attacks.  The first is his shape shift ability.  This allows him to transform into another player and attempt to use deception on them, similar to the Doppelganger.  The Beast uses this ability on Lyssa, but she makes her saving throw and is not fooled.  The second attack is an energy blast, where The Beast hurls balls of destructive energy at his target.  The balls move slowly, however, and can be dodged.  The third attack is summon slayer, where The Beast summons slayers from the catacombs of the fortress to attack the party.  These are just regular slayers though, and can be easily killed.  The Beast does not move around his lair, so the party can just use ranged attacks and never has to get in melee range where they can be hit by his claw swipe ability.  During this encounter, however, the Glaive becomes lodged in his chest, and with all the other ranged dps in the group either dead or lost in another section of the fortress, is starts to look pretty grim for Colwyn, as he can't survive tanking The Beast in melee range without heals.  Fortunately, he is able to reach Lyssa, the princess, and complete the find the princess stage of the quest.  This awards him yet another level of xp and unlocks the fire blast ability, which allows him to continue damaging The Beast at range.  Eventually, The Beast dies from this attack and the black fortress begins to self-destruct.  This activates the timed quest, escape the black fortress.  Colwyn and Lyssa have to race through the corridors of the fortress, locate their lost party members and find the exit before the timer expires or they will be killed and have to repeat the level.  Fortunately, they are able to complete this quest on the first attempt and make it outside safely, at which point Colwyn completes the rescue the princess quest, earning him another level of xp and unlocking the title Ruler of Krull.

Yes, I totally went off on a MMORPG tangent there, and that's why Krull is such a bad ass movie.  Not only is it a thoroughly entertaining piece of glorious 80's sword and sorcery and aliens cheese, but it's also a kick ass video game!  Seriously, if you haven't seen this movie, you need to.  Shit, you can even view the whole thing for free on youtube!  Check it out: