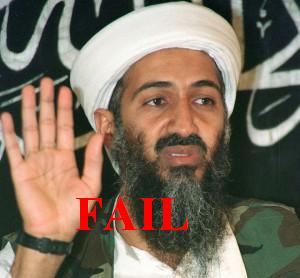 After 18 long years, the biggest thorn in America's side has finally been pulled.  Yes, I said 18 years, before the attacks on 9/11 there was the first WTC bombing in 1993.  This cocksucker has been a plague for nearly two decades, and now he is fish food.  Couldn't have happened to a nicer guy.

Like most of the country, I was completely surprised by the announcement of his death last night.  And, like most of the country, I was immediately filled with a rush of pride and closure.  Pride in our soldiers and special operations who worked diligently to finally catch and kill OBL.  Pride in our president, who gave the order to kill and brought an end to 10 years of the insulting continued existence of the man who orchestrated the worst terror attack on U.S. soil.  Pride in our country, who once again is coming together, only this time not as victims but as victors.  It might take 10 years, but if you fuck with us, you get fucked with.

Closure.  Closure, hopefully, for the families and loved ones of the victims of the 9/11 attacks.  Closure for the families and loved ones of the soldiers who have sacrificed their lives in the 10 year long war on terror, a war that was started because of this man and diverted almost immediately to an entirely different objective and only within the last 2 1/2 years has finally refocused on getting the guy who is responsible for this whole mess in the first place.  Closure for America.  Finally, the guy who punched us in the face 10 years ago got his long overdue punishment.


I know this is going to be politicized all to hell.  Not even 30 minutes after Obama gave his speech officially announcing the death of OBL, the spin doctors were all over it, either giving all the credit to Obama or downplaying Obama's role and giving credit to Bush.  One thing is a fact, however.  Back in 2002, Bush said this:

This statement was made not 6 months after the attacks on 9/11.  The whole reason we went to war was because of those attacks and the man behind them, and our soldier's boots had barely touched ground in Iraq - NOT the country Osama was in - when Bush said he didn't really even care about OBL anymore, he wasn't important, he didn't even think about him.

So, I have to say a big "Thank you!" to president Obama for finally doing, 10 years later, what Bush promised he'd do on that pile of smoking rubble, with his arm around that fire chief, after 9/11, and then apparently didn't think was important anymore half a year later, after he already got what he really wanted, which was congressional support for payback for his daddy.

I just want to put that out there, for all my conservative friends who are jumping all over this as Bush's victory.  Your boy bailed on OBL before we even had full troop deployment in the middle east, so you don't get to claim this as a victory for Bush and his policies.  If this was a baseball game, Bush pitched 8 horrible innings and then Obama stepped up to the plate and won the game.  Don't hate the player...


Also, conservatives, you don't get to swoop in and claim the one bright spot in Obama's presidency as a republican victory.  Sorry.  Don't get mad, you wrote the rules yourself during the midterms, remember?  Remember all that talk about "We're sick of the democrats blaming the bad economy on Bush!  Obama is president now, you all need to stop living in the past and take responsibility!"  Well, it goes both ways.  You don't get to come in now and take all the credit for catching and killing OBL, not when Bush said it wasn't even a priority for him, and certainly not when you say that everything that happens from the inauguration forward is all Obama's responsibility, and not Bush's and not the republicans.  Karma's a bitch!


At the same time, democrats, don't think that you're going to win the white house back just off of this.  Granted, Obama's poll numbers are already up and the positive effects of OBL's death on the global markets, especially oil prices, are already being seen, but if shit doesn't start improving around this country pretty soon, you can kill Osama, Khadafi, Ahmadinejad, Cobra Commander and Fred Phelps and you won't even win second prize in a beauty contest, collect $10.

Osama's dead, a resounding blow against his terror network has been struck and the world is once again made aware of the fact that you don't get to fuck with the USA and get away with it.  However, we have a lot bigger problems to deal with and this next year will be a long one and no one will care who you finally caught and killed come election time if shit doesn't start getting a little better around here.


So.  Who deserves credit for killing OBL?  Well, the president gets props for refocusing our efforts on finding him and giving the order to take him out.  The CIA and other intelligence-gathering agencies deserve credit for finally gathering some accurate, actionable intelligence and giving the president the info needed to give that order.  But, the real hero in this story is the guy who put one in that shit bag's dome.  The Navy SEAL who took that tall-ass turd burglar out with a cap to the brain pan.  They aren't the best-trained military in the world for nothing. 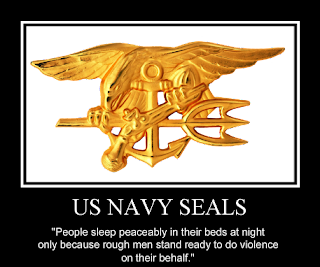 So, let the political back and forth begin.  Let the dems take all the credit, let the gop take it back retroactively, let them give the win to Obama, let them give it to Bush, let the talking heads talk, let the spin doctors spin, but at the end of the day, it was a hard ass Navy SEAL who took that motherfucker out.  Are you listening, Khadafi?  When you see that red dot on your forehead, it doesn't mean someone got your religion wrong.
Posted by Dave at 4:49 PM