This has been a rough few years for the old guard conservatives.  The defeat of John McCain by Barack Obama was both a literal and a metaphoric loss.  It didn't just represent the loss of the Republican candidate to the Democrat, nor was it simply about young ideas and idealogs vs. old ones, it represented the rise of the minority in America.

Now, I can already hear my conservative friends, "Obama is half white you know!"  And you're right, he is half white... until he tries to hail a cab in New York, get a loan approval from a bank or date your daughter...  You see, it's not about Obama, it's about what he represents.  You can make all the excuses you want, you can justify your dislike of the guy based on the tax hikes that he never imposed (He actually lowered them for 95% of working Americans), the socialist agenda he has yet to implement, the wild and crazy direction he's supposedly taking our country in - despite the fact most of his policies have been little more than continuations of Bush administration policy, vis-a-vis the wars in the middle east, bailouts, Guantanamo, The Patriot Act, etc. etc. - you can holler all you want about how it is about everything else in the world except race because the guy is half white!  But when it comes right down to it, it's about white guys losing their jobs to brown guys, and Sarah Palin

See, for all the public back-patting about how progressive and forward-thinking they are, rich old white men are used to things being done a certain way.  That way being the way that always works out best for them.  I know this because I know a few rich old white men myself, and with a few notable exceptions, their wives stay at home, cook them dinner, take care of the kids... all the stuff a "traditional" wife does.  Their woman is in the kitchen, their kids are in their rooms, their Mexicans are in the gardens and their entitlement and arrogant supremacy is always right where they left it, in the garage next to the mini fridge full of beer, on top of the box that holds the secret porno stash.

Obama is the quintessential brown guy who "stole" the white guy's job, and it's not just a job at the factory downtown, it's not just the promotion at the office, it's the highest position in the land.  Johnny Fontane comes along with his olive oil voice and guinea charm (Jack Woltz, The Godfather, 1972) and waltzes right off with the white house, and makes rich, old, white men look ridiculous, and men in their position can't afford to be made to look ridiculous!  "Now you get the hell outta here and tell that goomba that if he wants to try any rough stuff, that I ain't no band leader!  Yeah I heard that story!"

But, I digress.... (Damn I want to watch The Godfather again right now...)

My point is, no matter how much the white male majority component of the conservative right tries to play it off to anything other than their supremacy being challenged, Obama's presidency is about exactly that.  It's about a group of wealthy and powerful individuals being used to things working a certain way forever and now there's a monkey wrench in the works (no pun intended, wocka wocka) and the free ride ain't so free anymore.  Rich white men don't own blacks anymore, and haven't for a long long time, they can't order them around.  Sure, when you're talking about the presidency, rich white men will always "own" them and order them around, until rich white men no longer own corporations, but it's more of a figurative liberation than a literal one.  Obama becoming president is the inevitable result of a cultural change that finally culminated in 2010.

2010 was the first year where more minority babies were born in America than white ones.  2010 is the beginning of the inevitable shift in the balance of power in America, which will ultimately end with whites becoming the minority.  As more and more minority and bi-racial children are born and less and less "pure" white babies are born, our culture and society in America will change to reflect that.  More minorities will become powerful business owners, more minorities will have a voice that rich, old white men will have to listen to.  The time will come when simply being the great-great-great-great-grandson of Nelson J. Hrrffenfuffer the 3rd won't be enough to get you a free ride through life in the back of a solid gold limousine.

And this is why Sarah Palin, Michele Bachmann and all the other "modern" conservative women are the salvation of rich, white, conservative men. 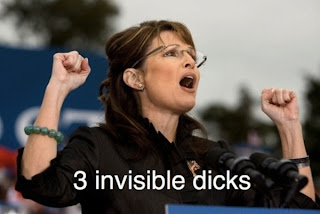 See, Sarah Palin and the other "MGILFS" (Mama Grizzlies I'd Like to Fuck) represent the traditional American housewife.  They know their place, they make sure dinner's on the table, the bring you your slippers and pipe, they suck your dick and then they shut the fuck up and leave you alone.  They're controllable, infinitely controllable, because they want to be controlled.  Sarah Palin wants women to go back to living in the 50's, back when abortions were illegal and a woman's place was in the home with her "cubs."  Whether she practices what she preaches is irrelevant, because - like Obama - it isn't about who she is, it's about what she represents.

Who is the single, largest voting group that supports Sarah Palin?  White conservative males.  Minorities hate her, women hate her, liberals definitely hate her, but white conservative men can't get enough of her.  Why?  Because she represents their last, best hope at getting back the America that they're used to.  The America that Glenn Beck and all his sycophants want to "restore," the one where white men are back in charge and everything is right with the universe.

A Sarah Palin or Michele Bachmann or any other regressive, conservative female in the white house is like leaving your wife in charge while you're out of town.  All you have to do is call in and check on things and tell her what to do and it will be done by the time you get back to retake control of your household, and that's exactly the relationship that the old guard Republicans have with these women.  They're the modern version of the girls who rolled up their sleeves and worked in the factories while our boys were fighting overseas in WW2.  They handled business, got things done and when the war was all over it was "Ok ladies, great work, us guys will take it from here." and back into the kitchen they went for 30 more years.  A Sarah Palin or Michele Bachmann president is just "minority" enough to appear trendy to... well... other conservatives really I guess, but they know the game and they're willing to play by the rules as long as they can have a little money to do some shopping and maybe get their hair and nails done.

True, "modern" women aren't fooled by their bullshit.  Women who busted their asses to get on equal footing with their male counterparts see a Sarah Palin and they see a big, fat middle finger pointed right at all their hard work to earn that respect.  It's like spending 12 years in college and climbing the corporate ladder from the very bottom just to have some bimbo in a Hooter's outfit cut in front of you right as you reach the door to the executive washroom and bitch about how she chipped a nail breaking that glass ceiling.

But white, conservative males can't get enough of them.  They represent the end-run scam that they can use to get their white house back in 4 years.  Especially a fucking serial quitter like Sarah Palin.  Hell, all they have to do is get her in there in 2012 and she'll bail on the job by 2016 claiming she wants more time to spend with her family or the politics are just too dirty or she won't play by "The boy's clubs rules!"  Meanwhile, all the old creeps will slap her on the ass on the way out like the slutty secretary she is and move right back in to their comfy leather chair that she kept warm for them.

Fortunately for the rest of America who's aware that this is 2011, old guard white conservative males are losing their strength by the day.  Without women and minority votes, Palin won't get past the primaries, let alone into the white house.  The problem with the conservatives game plan here is they overestimated the amount of time it would take to get the voting public used to the idea of a female candidate.  Hell, Hilary had most of America on board with the idea when she ran against Obama, which is why the Republicans had to hurry up and stick Palin in as McCain's VP candidate before she was ready for all those "gotcha" media questions like "What do you read?"  They gave us too much time to get to realize what a shallow, selfish, disloyal and opportunistic C U Next Tuesday Palin was.  The honeymoon ended sometime before "Sarah Palin's Alaska" and her teen mom daughter competing on Dancing With the Stars.  In fact, Bristol Palin probably has a better chance of getting into the white house in 2012 than Sarah, but only if she's banging the president.  HEYOOOO!

So ok white male conservatives, maybe it isn't about race per say.  It's about control.  It's about you still being king shit on your throne and the rest of the world doing what you tell them.  But, no matter how you try to spin it, justify it, qualify it or marginalize it, you don't want those brown guys taking your jobs and fucking up the good thing you've had going since we first landed here and started handing out smallpox blankets to the Indians, because you don't know what's going on in their heads, you don't know what they want to do with your country, all you know is there's gonna be a lot more of them than you soon and you're running out of ideas to maintain your tenuous hold on the helm.  Unfortunately, if you think dolling up a bunch of housewives, getting them to memorize a few hours worth of talking points and teaching them to read speeches off a teleprompter with a spunky smirk and a flirty wink is going to trick the country into letting you set us back 50 years, it's going to be a long November...
Posted by Dave at 5:25 PM