It's some kind of Great, Pumkin-like object, Charlie Brown!

I love Halloween, absolutely love it.  It's my favorite holiday.  I love everything about it, from the costumes to the scary themes to my annual tradition of watching as many scary movies as I can during the entire month of October.  I'm just a fan of Halloween, through and through.  It's even the one time of year that candy corn doesn't completely disgust me (but only for a minute).  Halloween is just a perfect holiday.  I mean, think about it, it's got everything - costumes, parties, stuff for kids and grown-ups to do, things you give away (candy, mostly, sometimes STD's) and it's own official object to decorate and show off your Halloween spirit.  Christmas has the Christmas tree, Festivus has the unadorned metal pole, the Fourth of July has shit you set on fire and Halloween has the Jack-O-Lantern!  It is on that note that I present to you a brief collection of some of my favorite Jack-O-Lanterns and related pumpkin-based creations in tribute to the best holiday ever! 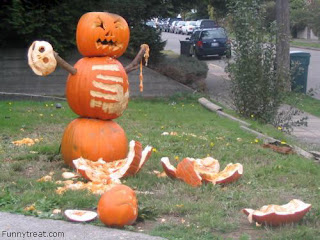 This is one of the first funny pumpkin creations I remember seeing, so I have no idea how old it actually is, but this image has been around for a while and reposted about a billion times over the years.  It's creative, funny and just disturbing enough to let a smart kid know that this dude probably has the best candy.  We're talking chewy sweet tarts, mini snickers bars, maybe even some Reese's peanut butter cups.  All you gotta do is muster up the guts to walk past this crazy ass killer gourd and ring that doorbell! 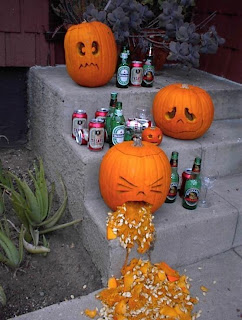 This is also an oldie but a goodie that I remember seeing way back when.  Unlike crazy killer pumpkin man, the guy who made this display probably doesn't have a great selection of candy.  It might not be as lame as the people with the orange and black wrapped taffy that tastes like a combination of stale peanut butter and ass cheese, but he definitely cheaped out and got some ghetto ass candy so he could spend more money on the booze he's got in there for the party he's throwing later after all the trick-or-treaters stop knocking.  So, you might get some of that crappy gum that keeps it's flavor for about 10 chews if you're a kid, but if you're a grown-up, dude probably has some Patron Silver ready to hammer back! 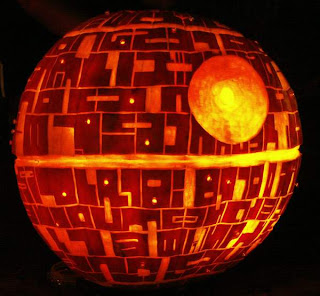 "Witness the power of a fully armed and operational carved pumpkin!"  This one hits all the nerd receptors in my brain.  I just love it.  This guy probably has either some really obscure, Japanese candy that he ordered online or he's got Mars bars or something to be ironic.  Either way, you're probably going to get hooked up because if he put this much effort into just carving the pumpkin, there's definitely going to be some dry ice or something involved when you actually get to the front door.  Oh, and I'm guessing he answers dressed as a Jedi.


Now this is a life worth saving! 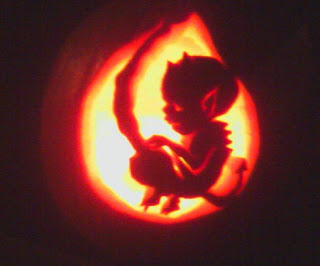 This would be the best Jack-O-Lantern ever if it was displayed at either a Planned Parenthood clinic or next door to some hyper-religious pro-lifers.  Either way, this house probably has Red Hots or some other, possibly devil-themed cinnamon candy. 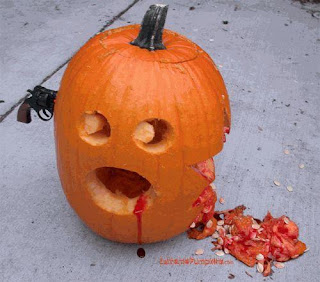 This one is awesome and disturbing, but mostly awesome.  Clearly, this pumpkin has given up, the question is, why?  What caused this guy to get so despondent that he blew his... pumpkin guts?... out?  Is it because the guy who carved him is planning to give out healthy treats, like snack packs of baby carrots, to the kids?  Or, is it because he got a look at the Jack-O-Lantern next door... 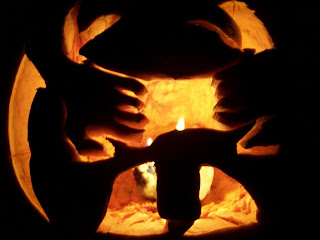 One of the most disturbing and brilliant Jack-O-Lanterns I've ever seen.  For those who aren't familiar with the image that this carving pays homage to, google "goatse" images with the filter off.  Yeah, I should probably warn you first, but I like to let people dive in to shit like that without any idea what temperature the water is.  This is a fantastic carving, but at the same time you know that if this dude has any candy at all, it's probably soaked in rohypnol.  It also caused me to be aware that there is a borderline creepy fascination with integrating porn and pumpkins... 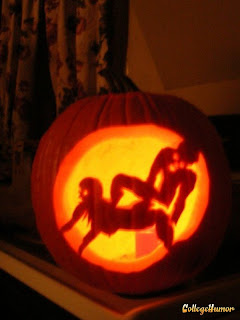 What are the odds that this dude is going to answer the door without his dick out?  This is actually a pretty great early warning system for parents.  If you see any variation of the "people fuckin"-o-lantern on someone's porch, you already know to just keep walking the kids on down to the next house.  The fact that the carving is so detailed on this just further lets me know that somewhere inside the house is another pumpkin carved with an anatomically correct vagina and anus opening.  Speaking of which...


I'm just doing this to pay my way through pumpkin college... 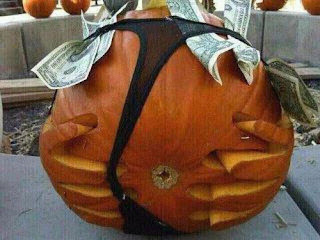 Extra creativity points for using the pumpkin's own natural butthole instead of carving a new one. 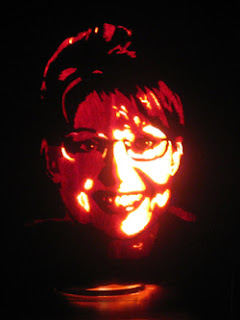 So many similarities between Palin and Pumpkin.  Both are thick, usually seen with a fake smile that looks carved on, they're popular for a few weeks every year, get old and repulsive really quickly the more they're left out and it would be so much fun to just smash them against a curb or throw em down the street for shits and giggles.  This is easily the most terrifying Jack-O-Lantern you could see on someone's front porch.  Also, for kids, you know this house isn't giving you any candy, because hand-outs are for socialists! 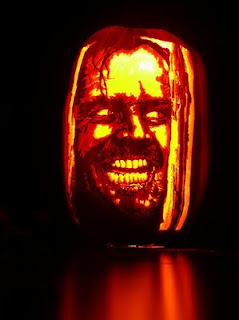 "Heeeere's Johnny!"  All beer and no tv makes Homer something something...