If time really was money. 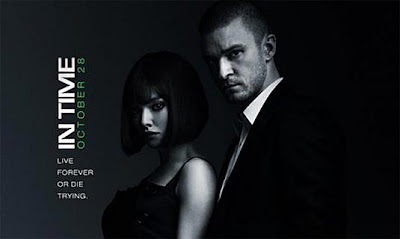 I watched the movie "In Time" this week.  Overall, it's an ok movie - not great but not bad either - but I thought the premise of the film was rather interesting.  It's a future dystopia movie about a society where humans are genetically engineered to stop aging at 25 years old.  When each person reaches 25, they are given one more year to live, represented by a ticking digital clock display on their arms.  When the clock reaches zero, they die instantly.  However, if they can add more time, they can live on indefinitely and conceivably be 25 forever, so long as they can keep earning more time.

Predictably, this film is predominantly about income inequality and the extreme gap between the very wealthy and the very poor.  The wealthy elite have thousands of years banked on their clocks and even more years stashed away in capsules locked in bank vaults.  Literally, the richest people in this future society can live forever, so long as they aren't a victim of a random act of violence or some freak accident.  As a result, all of the wealthy people in this society surround themselves with bodyguards to protect them from any unforeseen dangers.

However, there is another message in the movie, beyond the brutal portrayal of the caste system articulated in years rather than dollars, and that is the value that people place on their time when it's so definitively limited.  The very poor in this film often have less than a day of time in their personal clocks, giving a very literal meaning to the phrase "living day by day".  There are behaviors that the poor adopt, such as running everywhere they go so as not to waste time and obviously the desperation of knowing that running out of time means something a lot more serious than going hungry or not being able to pay the rent on time means there is a lot of theft of time from other people.  The ghetto portrayed in the film is plagued by a gang of time thieves who randomly accost people like a bully stealing lunch money, only it's hours or days off your life they're taking.  Again, it's the difference in value people place on things when they only have a brief and finite amount of time in their possession and literally everything costs some of that time.

While I thought the main story about income inequality, greed and the modern caste system were pretty well done in the world where time literally is money, I found the supporting storyline about making the most of the time we have to be equally, if not more compelling.  What would you do if every second really counted?  Not just in the metaphorical sense, but where you could actually die if you get lost on your way home, before you can "borrow" some time from a friend or family member.  Likewise, if you had time on your hands, would you loan or give any of it away?  In this movie, Justin Timberlake's mother (played by Olivia Wilde) loans him 30 minutes so he can buy himself something good for lunch.  Later in the film, she ends up dying in Timberlake's arms because she "times out" trying to run home because she didn't have enough time to pay for the bus.  Had she not given away that 30 minutes, she would have lived, but that's the risk you take when time is literally money.

So yes, I finished watching this movie and was left with the predictable empathy with the point the director was making about the unfairness of the caste system and hoarding of wealth by the privileged few, but then I already felt that way.  I already believed that there is an inherent callousness and insidious corruptibility in a society where so much is held by so few and not only is there no incentive for those wealthy few to share, it's actively discouraged as being destructive to the "delicate balance" of society.  The recurring phrase in this film is "For a few to live forever, many must die".  This obviously directly applies to the current attitude about wealth in our society, that for a few to be very rich many must be extremely poor.  So, in this regard, there was nothing particularly eye-opening about the driving theme of the film.

On the supporting theme though, I was left with an interesting outlook on things.  If my "wealth" were articulated by a decreasing clock on my forearm, how would I have done things differently?  How would I do things differently from this day forward?  In this film, a year is considered an impressive amount of wealth to the residents of the ghetto, a decade is a small fortune and a century is more wealth than most people will see in their lifetimes, considering most people in this future society don't live anywhere near that long.  Supposing I have 30 more years left, that's a ridiculous amount of wealth in a society where minutes by you a cup of coffee, weeks buy groceries, years pay rent and decades get you luxuries we take for granted like cars and houses.

So, if time really was money, how would you live your life differently?  What choices would you make differently?  How would you spend that precious time that you have?  When so much of your "wealth" of time is used to pay for things that you enjoy with the remaining time you actually have to live, how does that shape your priorities?  The one thing that kept occurring to me while watching this movie was that these people were spending all of this time off of their lives to buy and pay for things, so they never really had time to enjoy anything.  I found this to be the most poignant symbol of our current state of affairs.  The poor and lower-middle class in this country spend so much of their time trying to make it from one day to the next that they never really get much opportunity to actually appreciate the life they're working to sustain.  This was the case in this movie as well, the only people who could afford to take their time with anything were the very wealthy.  The only ones who could afford to walk slowly from place to place and who actually considered running to be something "poor people" did.  Basically, being able to "waste time" doing stuff was a luxury for the rich, everyone else was too busy trying to stay alive to sit around and play games, watch movies or do anything other than rush around looking for more time to add to their clocks.

Yeah, the premise of the movie is pure fantasy, but the message is very real.  Time is a valuable and limited resource.  Money lost can always be made back, material possessions can be replaced, everything we consider valuable can be renewed - the only thing we can't get back is time.  Every minute wasted is a minute that can never be replaced.  No, I'm not going to embark on some profound life mission now because I watched an interesting sci-fi thriller starring Justin Timberlake and Amanda Seyfried - no matter how hot Amanda is and how much of her bathwater I would drink - but I did have a moment where the simplicity of the films moral resonated with me.  Time is precious and if you can afford to waste it by doing something like reading this post - which I wasted the time to write - then you're actually pretty lucky, all things considered.  There are a lot of people who don't have this luxury.
Posted by Dave at 1:46 PM