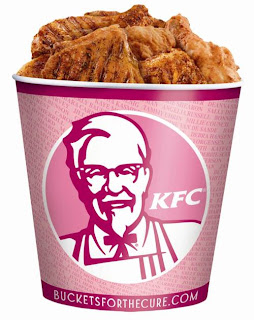 Neither can this bucket of chicken.

Today, Karen Handle, the VP of Public Policy for the Susan G. Komen foundation announced her resignation following the controversy over the foundations decision to first pull, then restore funding for Planned Parenthood's cancer screening services.  Handle's resignation comes after a week of public calls for her to step down.  Handle was viewed as the principle reason for the break between SGK and PP because of her open, anti-abortion stance and active role in facilitating the short-lived split between the two groups.

While Handle's resignation might be the best thing to begin to repair the damage to SGK's public image, the real damage caused by the actions of Handle on behalf of the Komen foundation aren't likely to be repaired anytime soon.

See, the problem with what happened between SGK and PP is that it has made a pretty basic and straightforward discussion - whether or not breast cancer is something we want to try to prevent and/or cure in our society - into a muddy and ideological debate due to the unnecessary inclusion of the abortion issue into the discussion.  Yes, Planned Parenthood provides abortion services to women.  These services are funded with private donations that are earmarked specifically for this purpose.  When people donate to SGK, their money is never used for anything other than cancer screening services.  There should never be an ideological debate when it comes to supporting the relationship between SGK and PP.  What I mean is, whether you are pro-choice or pro-life doesn't matter when it comes to breast cancer prevention, the two are not related.  If a pro-life person donates to SGK or even PP, that money will never go to abortion services, so that individual will never directly or indirectly fund an abortion.

Let me put it another way.  Say you are pro-life and you hate PP for the fact that they provide abortions and you would like to see them lose their funding for providing that service.  Well, you donate to SGK and other foundations that fund the non-abortion health services and they donate to the non-abortion services that PP provides.  Now, suppose everyone followed suit and only donated to PP on the condition that the money not be used for abortion services - eventually PP would not have enough money to continue providing abortion services and would have to abandon that aspect of it's service.  In this scenario, PP would always have plenty of funding for providing life-saving cancer screenings and other non-abortion women's health services, but it's abortion services would be choked of funding until they ended.

Now, obviously this is an unlikely probability, but that fact that it is a probability perfectly illustrates why supporting breast cancer prevention is a separate argument from supporting abortion, and why the rash and foolish decision by SGK is so deeply damaging.

No matter what your stance on abortion is, everyone would like to see breast cancer and other cancers wiped out of our society.  This is a no-brainer, I would argue.  So, supporting foundations like SGK means supporting research and funding to prevent and hopefully one day cure cancer.  Likewise, supporting the women's health services of Planned Parenthood means supporting providing women with affordable and life-saving healthcare and preventive medicine.  You can support this service without supporting abortion in any way.

For years, ever since the Susan G. Komen foundation began its partnership with Planned Parenthood, people who have donated to SGK have been supporting non-abortion women's health services at PP.  This was never a source of controversy, because it was never controversial in the first place.  Nobody who is pro-life ever inadvertently supported or funded a single abortion due to a donation to SGK.  If Mrs. Handle had never made the ill-fated decision she did, both pro-life and pro-choice supporters of breast cancer research and prevention would continue to donate to SGK without any personal reservations and SGK would continue to donate to PP and PP would continue to use that money strictly for non-abortion cancer screening and prevention services.

When SGK first announced it was pulling funding from PP, a lot of people who are pro-choice applauded the decision and vowed to always support SGK due to their decision.  I wonder how many of these people now feel "betrayed" by SGK and are now going to rescind their pledge to support them in light of their reversal?  Likewise, a lot of donations to SGK stopped after their decision.  Many women were outraged at SGK's decision and vowed to never donate another cent to the foundation so long as they continued their lack of funding for PP.  This hurt SGK as well.  In the case of SGK, the outrage over their decision clearly outweighed the support, or else Karen Handle would still be working there.  However, the damage has already been done.  There is now a connection between SGK, PP and the illusion that supporting their partnership means directly supporting abortion.  This is a non-existent, sensationalized and completely false connection that never existed and doesn't even exist now, except in the minds of people who are pro-life and convinced now that support for SGK means support for abortions.  This is a terrible and unfortunate distortion of reality and it's only going to hurt SGK and other women's health charities as there will surely be a rash of inaccurate and outright deceptive information flooding the news and social media about which women's health charities support which organizations and services.

This is the result of politicizing a non-political issue.  This is the result of drawing connections where they don't exist.  This is the result of sensationalizing an unsensational circumstance and creating ideological straw men to fight against.  For at least the rest of this election cycle - and likely on into the indefinite future - pro-life conservatives will demonize PP and organizations that support them due to PP's providing of abortion services.  People who are uninformed will react to these mischaracterizations.  On the left, people will take the opposite side, of course, and their own under-informed electorate will also react.

That's the legacy of the SGK/PP fiasco - there is now a political wedge issue on the subject of funding research to treat, prevent and cure cancer.

I certainly hope Mrs. Handle enjoys her next career move, which will most likely be a second chance at political office, fueled by the controversy she created at SGK.  I can't help but think this was a brilliant and diabolical move on her part to create a wedge issue where it never existed before, that she could ride to infamy and notoriety and, unfortunately, a huge following of support from poor, misinformed pro-choice conservative voters in her district who think she was a fallen soldier in the fight for conservative values.  In the end, Karen Handle will go on to be far more successful than she deserves, Planned Parenthood will continue to be well-funded and provide it's essential services and two women who used to be on the same side of the issue will now get into a completely ridiculous argument over wearing a pink ribbon.  Good job, conservatives, this is why I can't stand you.
Posted by Dave at 2:50 PM