Senator Roy McDonald gets it. 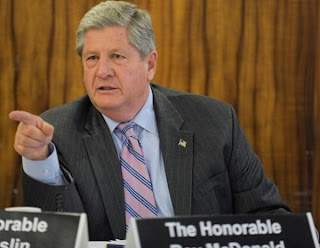 I had an idea all ready to go when I got up today for my blog post, and then I read this article from the NYDailyNews.  Senator Roy McDonald, a Republican, had finally had enough of the unrelenting pressure from religious groups to stand firm against allowing the passing of a gay marriage bill in New York.  When he finally read a statement from Archbishop Timothy Dolan, who equated the fight to legalize gay marriage with living in communist China or a totalitarian regime like North Korea where "The government presumes to redefine rights, relationships, values and natural law." and calling upon the Republican senators to fight against the gay marriage bill, saying "We cherish true freedom, not as the license to do whatever we want, but the liberty to do what we ought."  The senator had finally had enough.  Dolan and other religious leaders and groups had been putting unrelenting pressure on the Republican senators in New York, threatening to vote them out, lest they do their bidding, and Senator McDonald decided to take a stand and do the right thing.  He released the following statement:


It might be Roy McDonald committing career suicide, or it might be the start of something truly amazing in politics - politicians voting for what's right instead of what's going to get them re-elected.  Politicians voting with their conscience instead of toeing the party line and not rocking the boat.  This is the first time since before GW took office that I have been truly proud of a Republican.  It's about damn time our elected officials start listening to the will of the people and not just the loudest voice, the richest benefactor, the most powerful lobby or the talking points from the beltway propaganda machines.

I was just remarking in my post yesterday that our country would be a lot better off if people stopped voting simply based on the (R) or the (D), and instead supported the issues and the candidates who best represented their values and their best interests.  This isn't a two-team sport, you can like individual players, you can like individual plays, you don't have to always like everything one side does and hate everything the other side does.  When you do that, you get the mess we're in today, where our country is going to shit and everyone is too busy pointing the finger at the other guy to even bother coming up with a solution.

Along that same line, I saw another article posted by my good friend Kristin O'Brien today that shows the 3 biggest policies that have contributed to our overwhelming national debt, as well as the politicians who voted for them. 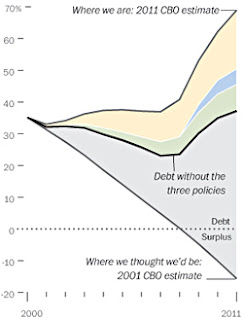 For some reason the color key didn't copy with the picture, but yellow is the Bush tax cuts, green is the cost of the wars in the middle east and the blue strip in the middle is the stimulus bill.  All the grey area at the bottom is debt that we would have had anyway, as is noted on the graph.  As you can see, those 3 policies account for well over 1/3 of our current national debt, and as you would expect, the voting record for those policies pretty much goes right down party lines.

As you can see from the interactive 3-circle chart on that page, Republicans unilaterally voted either for wars, tax cuts or both, but not for the stimulus.  Likewise, Democrats voted almost entirely for either wars or stimulus but only a handful also voted for tax cuts for the richest 1%.  So, what you end up with is a 3-ring circus that basically proves neither side gives a shit about saving money, reducing government or fiscal responsibility at all, they just want the money to go to their projects instead of the other guy's.  This is what I'm talking about when I say we need to stop voting for politicians based on the initial in parenthesis next to their names and start voting based on what they're actually doing in office.  If we did that, maybe our politicians wouldn't be so quick to just sign off on policies that inflate our deficit by nearly $5 trillion.  Policies that then require our country to take massive loans from countries like China.  Policies that make us financially beholden to countries that have no vested interest in our well-being at all, and in fact dislike us and would love nothing more than to see us fall from our mighty perch as a world superpower and become their door mat.

This is what a two-team political game gets us.  You literally have two sides who say almost the exact opposite things in terms of policy, but act almost identically in terms of screwing up our country.  You have the Republican party line on one side that says "War and tax cuts for the rich good!" and the Democrats on the other side that say "War and stimulus good!" and both sides are wrong, both sides supported policies that resulted in more spending, bigger government and, thanks to those tax cuts, less revenue to cover all that increased spending and bigger government.

For too long, our political system has been run like this.  For too long it's just been about (R) vs. (D) and everything else fell into one of those two categories.  If you were a (D) then you loved everything they did and hated everything the (R) did and vice-versa, and look where it's gotten us.  Neither side had the right answers, they just both wanted to take as much as they could for their team, their benefactors, their lobbyists, their special interests.  It's never been about the American people, because it's never had to be about us.

You see, when everything is redacted down to Dems vs. Reps, then there's no incentive to care about the voter.  Either we're going to vote for the (R) or we're gonna vote for the (D) and nothing anyone else says is going to change our minds.  When that happens, the 90% or so of the country who always votes for either one party or the other automatically doesn't mean shit to a politician.  Either you're going to vote for him no matter what they do, or you aren't, and that's it.  So, you don't have to worry about kissing the ass of your loyal followers any more than you have to worry about kissing the ass of your stubborn haters.  You just worry about the 10% or so of "undecided" voters who's votes can be swayed depending on which one of you can bullshit them into thinking you care about their values and issues the most.  Thus we have a political system where our politicians just do whatever they want and nobody really gives a shit about the voters until election time, and even then they only give just enough of a shit about just the areas of the country that aren't already pre-determined to vote one way or the other to try and win the majority, and that's it.  That's why our government sucks so bad right now, because we're a nation of "team" fans, instead of a nation of "player" fans.

That's why what Senator Roy McDonald did today is so important to me.  It gives me hope.  Granted, he's probably going to get run out of office come election time by the religious groups and their blind, sheep followers, but at least the guy voted on principle and not just out of a concern for his job.  If more politicians would take that same stand and show those kind of balls, we might be surprised at how much better things would get around here.

I would hope that voters reward Senator McDonald's bravery, just as I would hope they would encourage politicians in their own districts to follow suit and start voting based on what's right and not just on what's going to help further their ambitions.  They might be surprised to find that when you vote for things that help out the average voter, the average voter will help keep you there to continue looking out for us.  I know, it sounds like a radical concept, but hey, it might just work!
Posted by Dave at 2:25 PM