The Avengers is a Great Movie. 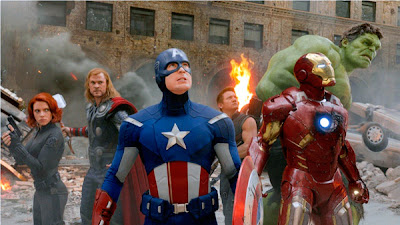 Like most of the country, I contributed to the record-setting opening weekend box office gross for The Avengers movie by going to see the highly-anticipated superhero film.  I had already heard from everyone I know that had watched the movie before me that it was amazing and one of the best superhero movies they had seen, so I had my expectations set pretty high when I sat down in my seat, diet Pepsi in hand and 3D glasses in the ready position.


What followed was over 2 hours of mind-bending action and special effects that literally flew out of the screen at me.  When the final credits rolled - the ones after the obligatory easter egg, that is - I felt like I had just been on a roller coaster, my heart was pounding, my skin was tingling with excitement and I had a perma-grin on my face that didn't subside until we were halfway home from the theater.  The Avengers might not be a perfect movie - it certainly has some plot holes and isn't the most fluid progression from the individual films that introduced the Avengers team members - but it's easily one of the best superhero films I've ever seen.


First of all, director Joss Whedon did a remarkable job accomplishing an incredibly daunting task - uniting each of the grandiose members of the Avengers into a dysfunctional yet unstoppable force without neutering their respective personalities or diminishing their strength as individuals.  I draw a comparison here directly with the X-Men franchise, which had the same duty of bringing together a team of superheroes, but where far more often than not the individual strength and stand-alone charisma of each hero was diluted in the group setting.  While Wolverine might be a perpetual lead role whether we're talking about X-Men Origins or X-men 3, many of the rest of the X-Men took alternating turns in the back seat.  I'm not saying that Cyclops or Storm or even Rogue weren't important parts of the films, but their respective scenes in the movies were interchangeable - any scene where Rogue did something heroic, Cyclops could have easily taken her place instead.  For the X-Men that weren't essential to the main storyline, their appearances were often just generic "superhero to the rescue" scenes that were only personalized by the use of that heroes respective super power.  So, Storm saves some people by using a lightning storm, if it had been Cyclops he would have blasted something with his eye beam and achieved the same results - meanwhile Wolverine is over here with Magneto doing something important to the movie.


This was not the case with The Avengers.  Instead of taking one or two of the heroes and constructing the plot around them with ancillary performances by the rest of the team, Joss Whedon gave each of the Avengers important, instrumental roles in the film from the beginning to the unbelievable final act.  From the subplot involving Hawkeye being mind-controleld by Loki to Bruce Banner learning how to control the Hulk to Tony Stark's benevolent turn from his self-absorbed persona to a selfless team player, everyone gets a turn in The Avengers, every character gets developed and treated with enough respect to make their individual fan base happy.  It's not easy to give equal time and effort to a cadre of superheroes without making a 6-hour movie or completely muddying and overcrowding the finished product, but Whedon handled the task better than anyone who has attempted it, be it the aforementioned X-Men series or Zack Snyder's work on Watchmen.


The second great thing about this movie, which is another credit to Whedon's direction, is the awe-inspiring action sequences.  By the time the final act kicks in, it is apparent that Whedon knows how to choreograph a grand-scale battle on multiple fronts with a congruency that is remarkable.  We have Iron Man flying around the skies, Hawkeye sniping from a rooftop, Thor, Captain America and Black Widow kicking ass on the ground and Hulk... well... smashing everything everywhere in between.  However, as much as these respective battles were separate, the action often spills from one area to another and that keeps the viewer aware that all the action is tied in together and not just existing in a handful of scattered bubbles.  Again, it's another mark of good direction to be aware of both the micro and the macro of a setting and it definitely shows the skill of the director when they can maintain both aspects without cutting corners.  When you see a flying, 3D fight sequence where a part of a ship that was blown up back here flies forward and takes out a second ship over there and then here comes Hulk jumping through and smashing something there and then Iron Man blasts something else over here and it all ties in seamlessly and at such a blistering pace that all you can do is say "holy crap, that was awesome!" That's good filmmaking!


Also, not for nothing, but The Avengers also happens to be the best Hulk movie ever made.

I'm a big Edward Norton fan and I was more than a little disappointed that he wouldn't be reprising his role as the Hulk in The Avengers.  However, Mark Ruffalo is possibly the best Bruce Banner since Bill Bixby.  Ruffalo does a great job of portraying the mild-mannered scientist with both sympathy and self-effacing humor and the build-ups to each of the appearances of the Hulk do a great job of stoking anticipation, which the Hulk delivers on and then some.  I went into The Avengers thinking that Iron Man would end up being my favorite character because of how much more I enjoyed the two Iron Man movies than any of the other individual hero movies, but when the movie was over, the Hulk was far and away my favorite Avenger.  Holy crap is he a bad ass! 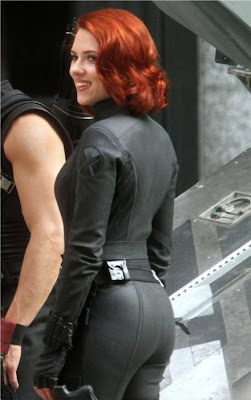 Speaking of bad ass, my second favorite Avenger was Scarlett's butt in those body suits.  Seriously, her hotness was off the charts in this movie.  I found myself thinking "Man, they sure are giving a lot of screen time to Scarlett, considering her character is probably the least powerful Avenger next to Tony Stark without his Iron Man suit", but at the same time I didn't care because every scene she was in was like a tribute to her relentless sexiness.


All of this action and eye candy would easily have made The Avengers a quality popcorn flick on its own, but what really takes this movie to the next level is the witty script and great writing that preserves the color of the characters from their individual films and uses them brilliantly to underscore the difficult task of integrating a room full of egos into a fluid, cohesive fighting unit.  Of course there's going to be a bunch of smart ass comments and clowning from Tony Stark, not only is it expected, it's where Robert Downey Jr. really gets to shine and show why he's the perfect actor for that role.  But, in The Avengers, Stark gets his egotistical bravado slapped in line in the presence of stronger, tougher and more focused guys like Captain America and Thor, who plant the seed of putting the team over the individual that eventually leads Stark to his turning point moment at the climax of the film.  Likewise, Starks knack for diffusing a stressful situation with a non-sequitir or a sarcastic joke rubs off on his more serious teammates, which makes for some great laughs on their part as well.


Sure, there are some plot holes.  There were events and circumstances at the ends of some of the individual hero movies that seem to be completely ignored or at least unexplained in The Avengers - not the least of which is how Thor and Loki were both able to come to Earth when Thor left Earth seemingly unable to return and Loki was banished to a supposedly unescapable dimension - and where the hell was the S.H.I.E.L.D. flying aircraft carrier heading anyway?  Also, I don't want to spoil too much of the plot, but I get that Loki is the trickster God and everything, but his "plan" to manipulate the respective Avengers into fighting amongst themselves was so weak and it really seemed more like everyone just decided "Hey, Loki is going to try and turn us against each other, so let's let him do it." without him having to do much of anything at all.  These are relatively minor criticisms though because ultimately, this movie delivered across the board in spectacular fashion.  I mean, really, it's a summer blockbuster.  It's a popcorn movie thrill ride.  It could have had a way flimsier plot and still been an amazing and wildly entertaining movie, easily worth the overinflated ticket price to see it in 3D.


Also, note to Michael Bay, this is how you do 3D in an action movie.  After fighting off motion sickness and trying to figure out what was an autobot, what was a decepticon and what was a bunch of random, pointless metallic crap flying around amidst chaotic, out of focus explosions in the last two Transformer movies, it was refreshing to see high-speed 3D action sequences that were actually easy to follow and where the characters were distinguishable.  It actually is possible to have a bunch of crazy, 3D exploding CGI action on the screen without it looking like a kaleidoscope train wreck, who knew?


Lastly, honorable mention has to be given to the uncredited star of the movie (at least in my opinion), the Acura NSX roadster that Tony drove.  Much like the Audi R8 (which is so, so sick as hell) that he drove in Iron Man, Stark unveils another badass road demon in the NSX. 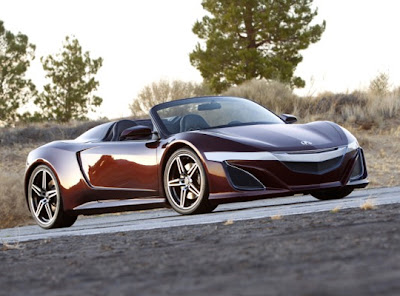 Suck on that, Bruce Wayne.


Speaking of which, The Dark Knight Rises is going to be balls as hell, but that's for another blog!  Go watch The Avengers, it totally lives up to the hype and then some.
Posted by Dave at 1:06 PM