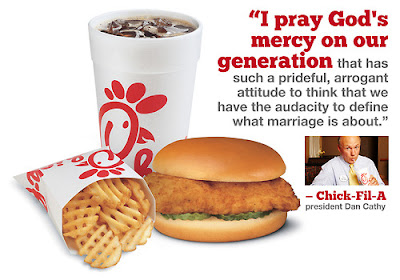 The way I see it, as a privately-owned company, Chick-fil-a can support whatever causes it wants to and its leadership can make whatever statements they choose in the media.  I fully support the right of Dan Cathy to express his opinion whenever and wherever he wants to.  This is, after all, America and, as of this afternoon, the first amendment still exists.

My only beef (get it?) with this whole gay marriage "scandal" that's put Cathy's company in the news and brought down a deluge of both anger and support from both sides of the gay rights issue is that his comments are just stupid and betray the hypocritical one-sided bias that the anti-gay marriage crowd displays every time they open their chicken pot pie holes and decide to spew another round of their self-righteous ignorance.

Cathy said "I pray God's mercy on our generation that has such a prideful, arrogant attitude to think that we have the audacity to define what marriage is about."

What annoys the holy fuck out of me about that statement is, what exactly are Cathy and others who believe as he does trying to do?  Are they not also audaciously defining what marriage is about based on their own selective interpretation of the bible?  That's all the religious right does on the gay marriage issue - arrogantly define what marriage is about.

It's been said over and over again on scores of progressive blogs and websites that conservative Christians love to pick and choose which parts of the bible they choose to strictly adhere to and which parts are just "symbolism" and "open to interpretation", or better yet, "reflect an outdated era in society and should be updated to fit our modern times."  These are arguments that I've heard to explain why conservative Christians don't still beat their wives for talking out of turn or beat their children for disobeying them.  It's why we don't still see evangelicals stoning women for entering church with their heads uncovered or forcing them into isolation for a week after their periods.  It's why modern evangelicals can wear mixed fabrics, eat shellfish, enjoy figs and make casual, non-sexual physical contact with a women while she's menstruating without also being quarantined until sufficient time has passed for them to be "clean" once again.  See, the bible is chock full of rules and beliefs that are completely ignored by the overwhelming majority of the exact same conservative Christians who refuse to budge on the acceptance of gay marriage due to the strict letter of the bible.  Never mind the fact that the same book of the bible - Leviticus - that denounces homosexuality is also the same book that prescribes all of the other aforementioned remedies for those odd and arbitrary offenses, because all that other stuff is just outdated, symbolic or just silly stuff and therefore doesn't have to be obeyed to the letter anymore... oh, but that gay stuff, there's no budging on that! 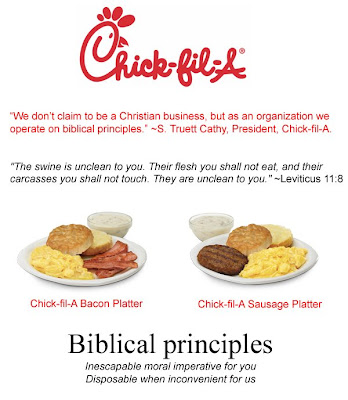 The above is a perfect example of my point.  Chick-fil-a, like all other hypocritical conservative Christian organizations and people, has an unwavering adherence to their interpretation of biblical principles when it comes to the issue of homosexuality, but when it comes to the other decrees taken from the exact same book of the bible, mere paragraphs before and after the ones pertaining to homosexuality?  Meh, we'll decide what that really means and we'll follow it as much as we think is necessary given the changing times.

Why is it that a restaurant chain that is so rooted in "biblical principles" that it closes on Sunday - the day of rest - at the cost of untold millions in lost profits, that it fervently supports the defense of "traditional marriage" - to the point of alienating even more customers and costing them even more profits, but they don't refuse to serve the biblically-banned "swine flesh" on their menu?  IT'S FROM THE SAME BOOK OF THE BIBLE!  It's not like you have to jump all over the bible and piecemeal quotes out of context together to make these points, they're written plain as day right along the same verses about homosexuality.

Incidentally, there's not a single mention anywhere in the bible about gay marriage.  Don't believe me?  Look it up.  Don't worry, I'll wait...

That's another great hypocrisy in the evangelical homophobic agenda, they have to make ridiculous leaps and connect all kinds of invisible dots in order to extract preachings against gay marriage from the bible.  While, at the same time, completely disregarding clear and direct commandments against things like eating pork and shellfish or allowing a woman to speak her mind without permission without beating her severely for it.  They even ignore other rules about marriage from Leviticus that conflict with their arbitrary vivisection of scripture.  For example, Leviticus also states that if a woman's husband dies, his brother has first dibs on claiming her as his wife and she is forbidden to marry outside of her late husbands family so long as their is a man in the family willing to take her as his bride.  Another little Levitican tidbit - if a woman is a virgin and she is raped, then her father must pay a penalty for her purity being despoiled and she must marry her rapist.  How's that hypocrisy taste?  Not too good?  Try a little Polynesian sauce on it, it really perks up the flavor.

So, like I said, if Dan Cathy and the company he heads want to base their company policies on the same "pick and choose to get what you want" mentality that drives their menu options, like good cafeteria Christians do, that's their right.  I support Cathy's right to run his company based on an inconsistent, arbitrary and ignorant personal ideology just as much as I support the right of the American people to either support him or oppose him and make their chicken sandwich buying decisions accordingly.  Really, I just wish these assholes would practice a little consistency, that's all.  If you're going to be unwavering in your adherence to one chapter and verse in a particular book of the bible, then hold that same strict adherence to ALL the chapters and verses in that book.  If you're going to oppose homosexuality, then stop eating pork, stop mixing your fabrics, put down that lobster or crab, start beating your wives when they talk out of turn, start killing people who violate church doctrines and start picking out a wedding venue for your daughters and the guys who bang them while they're passed out at a frat party.  Seriously, are you trying to spend eternity burning in hell?  What gives you the arrogant audacity to define what God's word is all about?