Today, I'm going to try insering some pics and vids to get used to the functionality and get a feel for Blogger's interface and whatnot.  So, first off, here's a picture: 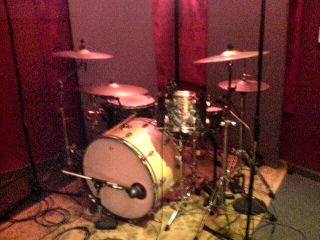 Alrighty, that was pretty easy.  That's Stryder's drum kit that I played when we recorded a bunch of songs and random crap last summer.  Fun times, if only I had some kind of internet forum where I could tell stories about the experience... ah well.  Anyway, on to inserting video:


Whoa, this IS easy!  So, I can do this picture and video uploading shit all day.  That video is by a band called Righteous Pigs, the song is Overdose.  If you don't like them, that's ok, I was lame once too.  Seriously though, they're a fucking great band and the first band I thought of when I decided my first video post was going to be a song.  Ok, so I can do words, I can do pictures and I can do video... there's a tool to add links as well, but I can't really think of any site I want to link to right now, so I'll screw with that later, but it seems like this interface is pretty idiot-proof, so I should only screw up a few dozen times.

Now that I kind of have an idea how to format this bitch, I'll start working on quality of content and post stuff that's a little more interesting slash controversial slash outrageous slash offensive slash whatever.  I kind of envision this page as a place to dump my thoughts that are too long and drawn-out to fit into 420 character statuses or whatever.  Plus, I can include visual media for added effect!  So, fair warning, if you don't like my multi-paragraph socio-political tirades on Facebook, or my overly verbose responses to questions about video games, music, which porn star has the nicest asshole or why I love the color green, then you probably won't enjoy this blog very much.  However, since 99% of the blogosphere is people pretty much doing exactly that, I suppose you knew what you were in for when you came here, so yeah fuck you.  I mean I love you, sorry, let's never fight again.  Slaunté.
Posted by Dave at 1:01 PM