Today is the Iowa caucus.  That magical time of the pre-presidential election season where one state is held up by the media, the beltway and the punditry as a barometer of... well... pretty much how the nomination race won't turn out.  In all but 2 of the last 8 elections, Iowa caucus voters have not picked the candidate who would end up going on to win the GOP nomination.  Ironically, in all but 2 of the last 8 elections, Iowa has also gotten it right when it came to picking the Democratic nominee for president.  However, since the incumbent running for re-election is a Democrat, the only party that matters in Iowa this election season is the GOP and that means all eyes are turning to Iowa to see who they will pick to be the guy who most likely doesn't end up winning the party's nomination.  And, who do Iowa Republicans like as their pick to lose that nomination? 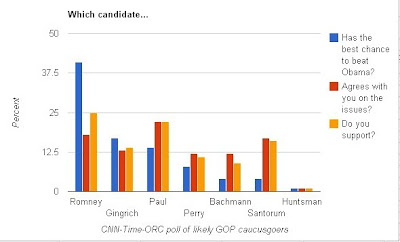 Well, if you believe the polling numbers, it looks like Romney is their reluctant hero to not get the GOP nomination.  Of course, given the incredible weakness of the rest of the pack, this could be one of those rare occasions when Iowa Republicans actually get it right.  More telling are the #2 and #3 picks.  It's funny that the biggest fight in the GOP candidate race is for second place, as if Romney doesn't even exist and whoever polls second-highest next to him will end up somehow winning the nomination instead.  Unfortunately for the rest of the herd, if Romney is still polling higher and ends up getting more votes, coming in second won't really mean a damn thing.  I mean, they can ignore the fact that Romney is polling higher than them while they all take turns soaking in the brief glory of being the "not Romney" flavor of the week, but Mitt still leads the pack, even if it's a weak lead at best and even if his tepid reception among his own party base will only be amplified in a general election fight.  More than this is a slight against Romney, it's a huge slap in the face of everyone running against him.  While the Newts, Perrys, Bachmanns, Pauls and Santorums of the world break their arms patting themselves on the backs for polling within striking distance of Romney at different points during this preliminary face-off (Sorry, Jon Huntsman, I don't know why the most reasonable-sounding Republican in the race is getting completely ignored by the base... oh wait, yes I do, the GOP is being run by complete wackos), the fact that none of them have managed to shoot to the front of the pack and actually stay there for any length of time is as much a testament to their weakness as candidates as it is to the reluctant acceptance of Mitt's candidacy as being the most legitimate of them all. 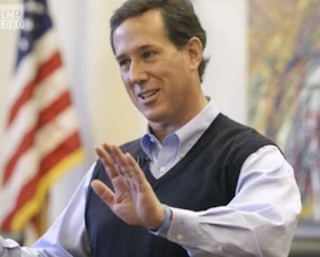 Santorum is in third place as of the latest polls of likely Iowa caucus voters.  Rick Santorum... the guy who said that the best way to save our economy was to pass a constitutional amendment banning gay marriage.  The guy who blames pretty much every problem in our country on the fact that gays are being treated like actual human beings with rights.  Bolstered by a lot of support from evangelical groups and donors, the man who's last name is now the definition for the lube, semen and fecal matter left in and around the anus after sodomy has managed to rise up from his seemingly permanent status at the bottom of the heap to an incredible third place among Iowa caucus voters.  Before the Iowa caucus, Santorum and Huntsman were both tied for "Why are you still running?" place in this shooting match, but now he's inexplicably polling high enough to actually get media attention.  Of course, in the same fashion as every other flash in the pan so far, Santorum is heralding this temporary surge in polling as irrefutable proof of his legitimacy and likelihood of winning the nomination.  Apparently, none of these guys read the news and are aware of how that has worked out for everyone else who was ahead or within striking distance of Romney since Bachmann first bafflingly won the Ames Straw Poll.

So, it's pretty obvious that no matter how Santorum does in Iowa, he's not going to win the nomination.  His hyper-conservative social platform isn't going to fly with anyone other than the socially hyper-conservative fringe of the base.  Never mind how badly he will bomb with independent and undecided voters in an actual general election.  No, Rick exists merely as a mouthpiece for that loud, angry and intolerant wing of the GOP who desperately wants the world to know that all of our problems will magically fix themselves if we just impose the Christian version of Sharia law.  Santorum embodies the essence of socially conservative ignorance and hypocrisy and the fact that he's polling in third place in Iowa is reason enough to call the legitimacy of the Iowa caucus into question. 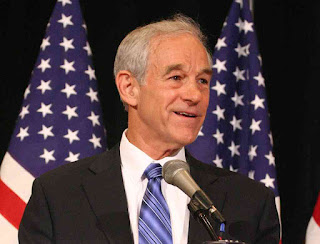 Ron, who found out over the past few weeks that leading in the polls means having to actually answer questions about the things you've said, done and had your name attached to, is probably the only other serious contender in the race besides Romney.  I say this not because his platform is solid and his ideas are so great - for the most part it isn't and they're not - but because he's the only other guy besides Romney with a staff that's actually organized, a war chest filled with enough money to actually compete and an operation that's focused on actually trying to win the nomination, rather than just sell a bunch of books and help boost his speaking fees on the lecture circuit after his inevitable defeat (looking at you, Newt, Michelle, Perry and latest Fox News contributor, Herman Cain).

Ron Paul is the only other candidate besides Romney to run his campaign like a real campaign.  He's got vitriolic attack ads, a famous viral grass roots organization and all the "looks great on paper!" neo-Libertarian conservatism to whip a bunch of white, suburban modern Republicans into a lather.  As a Libertarian myself, I actually agree with some of Paul's ideals - specifically his desire to delegate more responsibility to state and local governments, legalize drugs and other vices, stop inserting ourselves into costly foreign conflicts and overhaul our banking and monetary system.  Where we disagree, however, is pretty much everywhere else as well as the degree and nature of his proposed changes to our financial system.  Paul wants to essentially eliminate all government regulatory agencies and, I'm sorry, but running the largest economy in the world on the "honor system" is practically insane.  Paul's fallacy as a candidate is the fact that his platform is based on the belief that society is inherently good and, if left to their own devices, they will ultimately choose the wisest and best course of action.  The reality is, society is inherently greedy and selfish and, if left to their own devices, they will ultimately choose to exploit the system wherever possible, take advantage of the poor and weak and step all over each other to get to the top.  That has been demonstrated ad nauseum throughout history, regardless of the political party in office and the size and scope of our government.  This is why, no matter how good some of his ideas might sound, I can't support Ron Paul anymore than I can any other GOP candidate.

Romney is going to be the ultimate winner of the "Anyone but Obama" vote, after he wins the "Anyone but Romney" race that's currently being lost by everyone else far more than it's being won by him.  It's gotta sting to know that if any of the other candidates were worth half a shit, they'd be eating Romney's lunch.  More so, it's gotta sting to know that, in spite of the fact that the GOP base wants anyone buy Romney, the other candidates still aren't strong enough to do any better than second place.


The polls close in Iowa in exactly 2 hours.  And, about 2 more hours after that, we will know who came out on top in the caucus and how close the pre-voting polling was to the actual results.  It's really all sort of academic - everyone with an opinion and every pollster in the country is pretty much unanimous in their agreement that Romney will end up getting the GOP nomination - but I think the more important result of this caucus has to do with how seriously the beltway continues to take Iowa GOP voters based on who their #2 and #3 picks are.  If it's Paul and Santorum, then that's going to cast serious doubts on the credibility of Iowa GOP voters and their ability to reasonably pick a candidate with mainstream appeal.  Well, not so much perhaps for Paul, who has done a rather remarkable job of garnering youth support for his generally extreme social conservatism by wrapping it in a package of free-society Libertarianism, but certainly for Santorum.  If Iowa GOP voters honestly think Santorum is a viable candidate, I think that will call into question just how grounded in reality that segment of the GOP base actually is.  It's obvious to most of the voting public that the current GOP base is living in a bubble, oblivious to much of the actual problems facing our country and the popular views on how to address them, but the Iowa GOP voters are more and more revealing themselves to live in a bubble within that bubble, even more removed from reality and isolated in a dark, ignorant corner of close-minded neo-conservatism that has proven to be the undoing of the GOP ever since GW started driving the party off the cliff over 10 years ago.

Ironically, even if the Iowa GOP voters get it right this time, they may still be the biggest example of what's wrong with the party as a whole.
Posted by Dave at 3:10 PM